September 21st marked a global day of action against climate change around the world.  I was on the email list of the organisers of the Peterborough rally as early as last June, but knew I would not be around to help or participate.   But I knew there would be rallies around the world, and back in June, wondered if by chance we would be in a city with a rally.  350.org is the world leading NGO on climate change, and they provide an interactive map of rallies around the world so someone can easily find one close to home.  I checked before departing for Costa Rica, and noted that there would be 3 in the capital city San Jose.  But we didn’t plan to spend time in the capital, so I figured we were out of luck.  On the bus enroute to Monteverde I got another email from 350.org, so thought I’d check once more for a rally … and to my great surprise, there was now one planned in our little Monteverde … while we were there!
Our day on the 21st started at 6AM in time for a shuttle to the Santa Elena Cloud Forest Reserve for a 3 hour guided hike.  Fabulous! (more on that in another entry).  Heading back to Monteverde we stopped at the phenomenal “ficus tree” – we climbed up the hollow inside about 45′ high!  Then got back town in time for a quick bite and off to the rally.  I expected there to be 15 to 20 folks with a few signs – Monteverde is a tiny town.  We came around the corner to the rally staging area, and there before us were well over a hundred folks, marching band, traditional dancers, juggler, costumes, and so many fantastic signs.  Most signs were in Spanish, but a few were in English too.  The event organizers had a big 350.org banner, and there were a few extras for Kaia & Jake.
These Costa Ricans sure know how do do rallies.  It was raucous!  Drums, trumpets, shouting, dancing.  Lots of support from the sidelines as we marched right across town.  A highlight for our family was a temporary halt in the parade as participants were gawking at a tree.  Turns out, a 2-toed sloth was hanging out only 15 ft above the road!  I commented to the organizer that this rather quiet creature likely did not appreciate our noisy march, but then she reminded me that sloths are themselves threatened as this cloud forest slowly disappears from warming, and as such would likely accept our intrusion 🙂
I interviewed this organizer and learned that the rally represented a very broad cross-section of civil society organizations.  This town “oozes” green.  It is arguably the epi-center for environmental awareness in Costa Rica (stay tuned for upcoming blog entry), and Costa Rica is well known globally for its environmental leadership.  I believe that these folks are in tune with this issue especially because they understand their cloud forest, and the real threats imposed by climate change.
Needless to say, this was a pretty special moment for our family, and especially for me.  It was so reassuring and motivating to be halfway around the world and see such an outpouring of call to action.  I wondered how the climate rally at Peterborough’s Purple Onion (local food) festival had gone, then later read online that this global day of action represented the largest mobilisation around climate change in history.  Hundreds of thousands of participants in thousands of locations in over a hundred countries – all just days before world leaders meet yet one more time to work towards a treaty.  So lucky for us on this “sustainability tour” that we could be a part of it!
I am typing this entry from a fantastically inspired place.  I am sitting in the balcony of the waterfall lodge at Rara Avis (rara-avis.com), which is described by many as the beginning location for the modern concept of eco-tourism.  We are 15km from the nearest road (came by horseback and foot) in the midst of tropical rainforest, beside a two-tiered waterfall.  The only sound I can hear is crickets, birds, waterfall and the tapping of the keyboard.  Ahhhhhh…
Cam 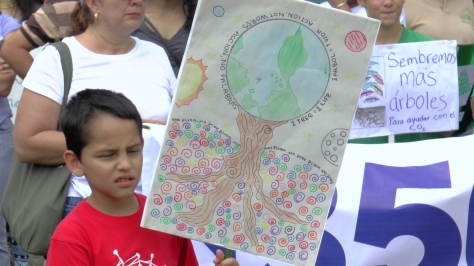 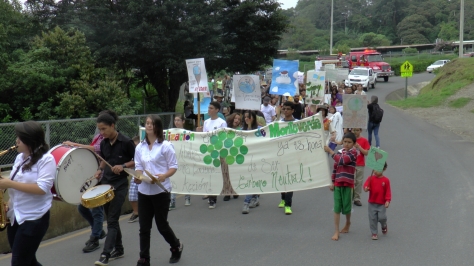 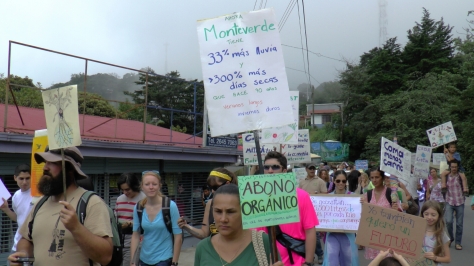 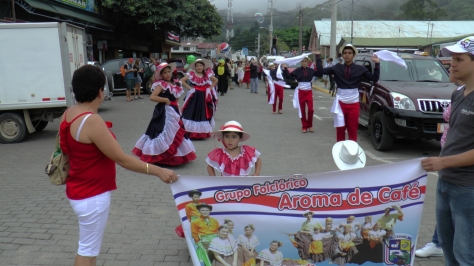 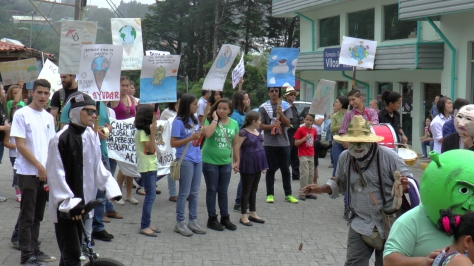