We got on a bus at 8am, DRIPPING with sweat in the heat and humidity of coastal Puntarenas.  Thankfully, the road soon started to climb and the temperature dropped consistently as we gained elevation.  The temperature improved but the road definitely did not —  it got rougher and narrower.  At one point, the driver had to carefully reverse down a hairpin turn to get to a section of road that was wide enough to let a loaded truck pass in the other direction.
We checked in at our budget accommodation called “Monkey Hostel” which is run by an energetic young man who was helpful and keen to tell us about  the activities available to tourists.  Monteverde is an ecotourism hub and world-wide model.  We wanted to see what it had to offer!  I was also interested to learn about how the community got started:  a group of Quakers from Alabama settled on the mountain in the 1950’s — they were opposed to the Korean War and chose to move to Costa Rica, a country that had abolished its military some years earlier.  They started dairy farming and built a cheese factory, but grew to recognise the inherent value of an intact cloud forest where species diversity and adaptations are phenomenal.  They were instrumental in establishing the Monteverde Cloud Forest Reserve.

Our first day was spent walking around a scoping out the options.  We met a transplanted Canadian couple who now run the Mariposaria (Butterfly Garden) and took a guided night walk at a local reserve that they recommended.  It rained throughout the 2-hour walk so we felt vindicated for having lugged around four sets of full rain gear and rubber boots for past month! 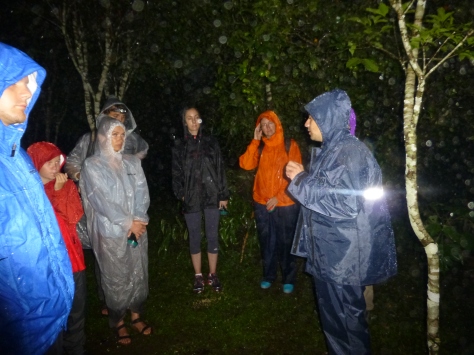 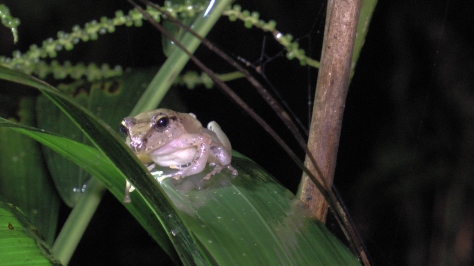 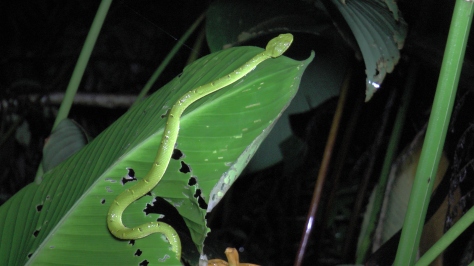 Day 2 started with 100% Adventure (yes, that’s the name of the company that runs a canopy tour that includes the longest zip-line in Latin America — 1 mile long!!)  This type of tour is a huge tourist attraction and even though it is the “green season” (read “rainy season” therefore “low season”) we were in a group of at least 50 tourists that morning.  The guides were very professional and competent, running the tour safely and efficiently.  Between some of the cables, we got to walk along bridges or trails through the forest.  Two cables could be ridden “superman-style” which means you get clipped on hanging in a flying position.  It definitely lives up to its name (100% Adventure), but we wondered if really fell in the category of ecotourism.  It does represent a viable business that can be run in a standing forest, but simply didn’t include any educational aspect (a key condition of ecotourism) and we walked away exhilarated, but with no further understanding of the forest, its animals, or ecological importance.  We mentioned this to our host at our hostel, and he concurred but did point out that the operation goes to great lengths to protect the existing forest and plants the parts of their property that were earlier in pasture.

We returned to the Mariposaria, this time for a full tour, given by Brita, a volunteer from southern Ontario.  She explained the details about butterflies from different environments and elevations.  We each got to release a newly-emerged butterfly, and yes, we got to see several of the large blue morpho butterflies that are famous for their size and stunning colour.

Next stop was the hummingbird garden just outside the Monteverde Cloud Forest reserve.  Multiple feeders attract the birds that are so numerous in this park and so important as pollinators.  We started watching from a distance, not wanting to disturb the cute little things, but when a knowledgeable interpreter came out and told us we could put our hands right next to the feeders and let the birds land on our fingers, we moved right in!  He went on the explain the research he had been part of when the BBC Planet Earth crew had been there filming.  Apparently they had put several hummingbirds through a “rain tube” with special sensors to film their flight.  When the video was slowed down, it was revealed that hummingbirds can react so quickly to the stimuli around them that they can fly through a rainstorm and avoid every raindrop!! 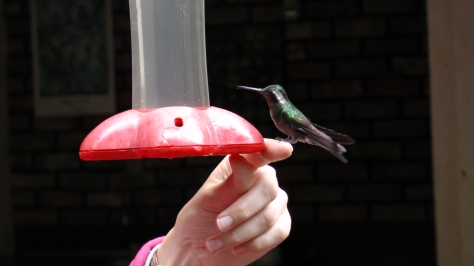 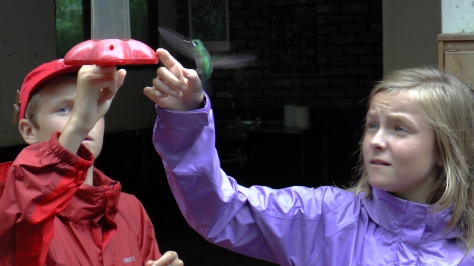 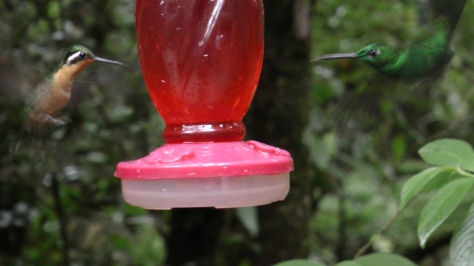 Next day, we got up early for a guided walk in the Santa Elena Cloud Forest Reserve (adjacent to and very similar to the Monteverde one).  The Santa Elena Reserve has a very close relationship with the local high school — giving students opportunities to work and learn in their precious ‘backyard’.  A good portion of our fees went to the school community.  We had a fabulous guide (not a student) who explained some of the mysteries of this amazing place. The lush greenery … massive tree trunks with huge canopies so high up … vines hanging down, and entire ecosystems growing off the sides of trees .. was captivating. 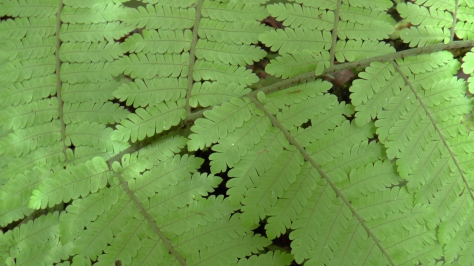 On the way back to town from the Reserve, we asked the taxi driver to stop at a well-known ficus tree that our hostel-owner had showed us pictures of.  It is a strangler fig that killed its host tree which has since decomposed, leaving an enormous, hollow, and very climbable tree – Cam and Jake went about 50ft up and could have kept going but came down only because we were short of time.

Then it was time to get back to town for the climate change rally that Cam described in an earlier blog post.  It was an awesome feeling (I felt kind of emotional, actually) to see the local people coming together about such a threat to their little piece of paradise — a place that I had just started to get to know over the previous 48 hours.  Each of our guides had talked about the fact that the dry seasons are getting noticeably longer, and that they are seeing small changes in animal behaviour.  For example, some animals are moving to higher elevations to get more moisture and that is affecting vegetation as well as changing predator-prey dynamics.  Tourism has allowed large parts of the forest to remain intact and provide economic benefits while not being cut down for pastureland, but the balance is fragile.  Plans to improve the road from Puntarenas would mean better access for tourists (no backwards driving around gravel hairpin turns), but it could also increase the number of visitors, reduce their length of stay, and increase vehicle emissions.  Luckily, there seem to be many very committed people in Monteverde who are considering these issues and looking for sustainable solutions.
At 2pm, our bus arrived to take us to Arenal, en route for the next adventure!  Our route involved a very scenic ride down the mountainside to lake Arenal, and then along the lake in a boat towards the iconic “Volcan Arenal”.  This volcano had been recently very active but has not erupted since 2010.
Yvonne

One thought on “Monteverde; adventure and diversity in the cloud forest”