Just got off our little Galapagos boat an hour ago and are awaiting our flight back to mainland Guayaquil.   The Galapagos Islands were FABULOUS … as everyone told us they’d be.   This photo from GoPro camera snorkeling a couple days back – its our new screen saver.  Lots to share with you in coming blogs, but for now we’ll catch up on our adventures before heading to Galapagos.
Jake just posted a blog about the same adventures as below, but his is in French.

After some great days of hiking in Chugchilan, we decided to go to the town of Banos. The bus schedule was a little unclear… then a pickup truck/taxi offered to take the four of us plus our packs to Zumbahua (about 45 minutes away) for 20 bucks. We chose the latter option. Even though it was a bit windy, we got some great views from the back of the pickup truck. 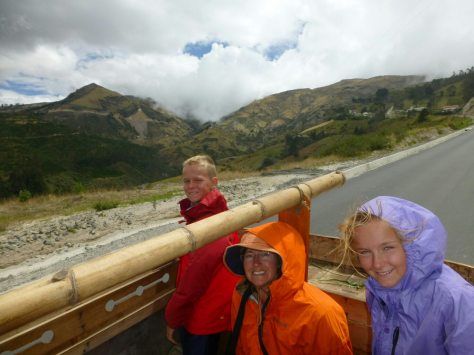 From Zumbahua (say “zoom-BA-wa”) we took a bus to San Filipe bridge in Latacunga. We got off there so that we could catch a second bus that would go to Banos. A lot of busses went past us (and the many other people waiting for busses there), they don’t stop, but the driver-helpers would lean out the door and yell out the destination, “Quito Quito Quito!” or “Ambato Ambato Ambato Ambaaatooooh…”. If he yelled out your destination, you wave your hands in the air and run to get on. When finally a bus to Banos came (about a half hour later) we got on, and so did some other people who were very anxious to get on before us and take our bags from us and put the in the compartment behind our seats, not the one directly above us. They were so insistent that they took the bag from my dads lap while he was drinking! the water spilt all over him. We think that they were trying to rob us.
When we arrived in Banos, (say “BA-nios”, I don’t know how to type the “n” with a squiggly on it) we found a hostel, then we went to see the natural hot bath. I don’t think it had changed much since 1950. My mom pointed out that the most modern thing was the neon light highlighting the sign that said “1950”! The town was quite nice – cobblestone streets, lots of craft shops – but the cool thing about it was that 90% of the tourists were Ecuadorians coming for the weekend. We had pizza for dinner and some people came to the pizzeria to play live, traditional Andean music! The three of them played drums or mini-guitar, plus panpipes, and they all sang! We liked it so much that we bought their CD.
The next morning, we woke up at 6:00 am to go into the hot spring. We were the only non-Ecuadorians there! It was really hot (no kidding, Kaia) and we cooled off in the freezing shower. After that we rented some bikes to ride the famous “Waterfall road”, downhill from Banos. There are four awesome waterfalls along the way. At the first one, we took the $1 cable-car across the valley.

In between the waterfalls, the riding was really cool, too. The main road goes into a lot of tunnels, but the cyclists can ride around the tunnels on the old road.

At the second waterfall, there was a zipline. The guy trying to convince us into it was quite drunk and told us that Jake, my dad and I could go there and back on the zipline, all for 20 bucks. We just couldn’t refuse an offer that good. At least the drunk guy wasn’t the one running the zipline!

Here is a clip from his GoPro video: http://m.youtube.com/watch?feature=youtu.be&v=JC1bgM0NRRo

Here is the video of the 1st part of my and Jake’s 2nd ziplines: 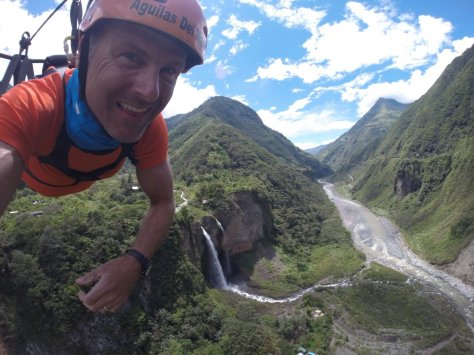 We like to visit waterfalls in the order of climax, so here goes waterfall #3.
You have to walk a couple of kilometers and pay a bit to get there. Only the pictures can explain the pure awesomeness. 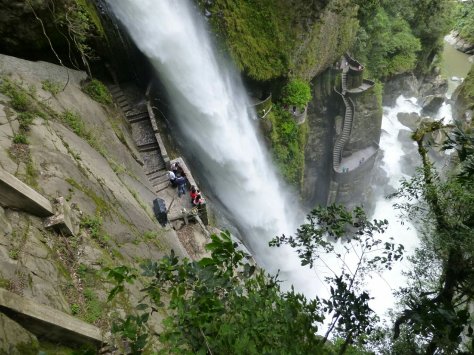 See the steps on the other side of the falls? We got really excited because we thought we could walk right behind the waterfall! But we couldn’t find the place to get to the other side. Turns out that two different people bought either side of the falls. Two different companies, two different entrances. Many people trying to make money off the same thing does seem quite Ecuadorian.
Anyway, we walked back up to the top, then went to the second entrance and back down again. We paid the second fee there, then went to see the falls again. The engineering of the trails on both sides is amazing- they are built right into the cliff, all done by hand, while the water pounds down around you. It’s really unbelievable! At one point, you need to climb through a tunnel in the cliff, then through a small opening above you. Can you imagine carrying rocks and cement through all that?! 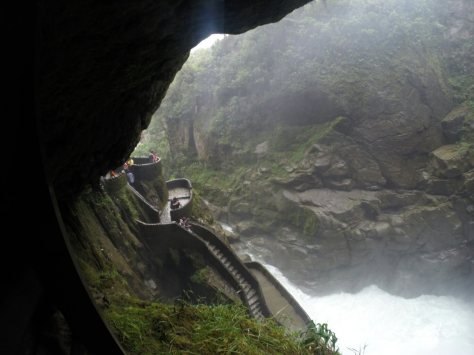 Seeing the falls from the other side was even better! 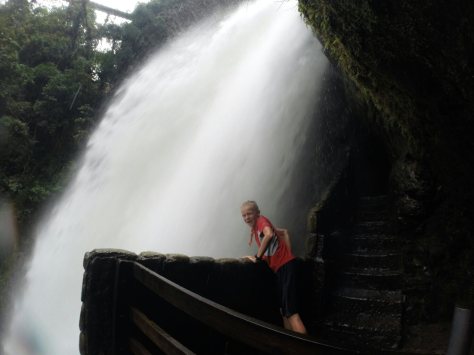 Then we went onto the suspension bridge…

By the time we had climbed back to the top, It was raining. We were soaked and decided to skip the last falls and catch a pickup truck back to town. 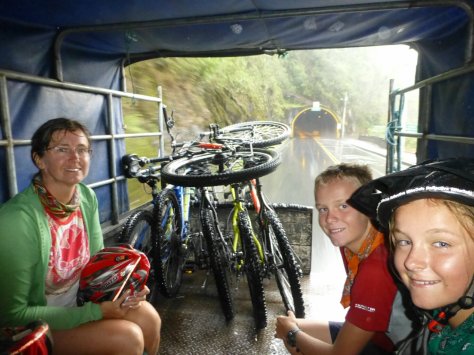 That night, my dad, Jake and I decided to check out the town square. There was a band playing, and people letting off fireworks and huge Chinese lanterns. It was really lively! Apparently, during the month of October, this happens every night, to celebrate “La Virgen de Santa Agua“, the virgin of the holy water.

The next morning, we ate at the central market. We also met up with Erica, Chris and Carl who we met at the Black Sheep Inn in Chugchilan.

We had some time before our bus left that morning (we were headed for Guayaquil), so we spent the usual half-hour searching for a bank machine that worked, then went to the San Fransisco bridge at the edge of town.

Jake saw that there was bridge jumping for 20 bucks, and remembered that his Uncle Craig had given him money for the trip, and thought about it for a while, then decided to do it. He was nervous, but only when he got to the platform did he realize that it wasn’t going to happen.