The Galapagos Islands have a mythic, even iconic reputation.   Growing up, I’d heard stories of bizarre, prehistoric animals that were not afraid of humans, living on stark volcanic islands.  And the significance of the islands in spurring on Darwin’s ideas of evolution are well known.  But beyond that, I really had little idea why these islands drew in so many visitors.  But now I understand.  I am writing this at 6AM on day 6 of our cruise of the islands – then sun just came up, and poured light onto the top of the huge volcano that is Fernandina Island.  Across the channel is the largest of the islands – Isabella – that is home to no less than 5 large volcanoes.  Their peaks soar to 1600m, which is impressive considering the size of the island.  Until this morning, the peaks of volcanoes have been shrouded in cloud, but this morning they are all in full view.  Wow.
There is much to recount of our time here – it is hard to know where to start.  Instead of sharing a day by day account of our activities and discoveries, we will instead share by theme – the land, water creatures, land creatures, birds etc.  We will also describe the challenges faced by the islands in terms of introduced species and growing pressures of tourism.  In this post I will just set the stage by describing our first day on the islands, and a bit of human history here.
We had no troubles convincing Kaia and Jake to get out on the morning of flight departure from coastal city Guayaquil.  The airport is spacious and modern.  The 1st stop, before checking in, is the inspection station, where they x-ray packs and look in anything suspicious for plants/animals/fruit that could be considered “introduced” species.  Next stop was to the ATM, which proceeded to deny us access to cash, but upon inspection of our bank account a few minutes later (thank goodness for airport WiFi!) we learned that the $300 we’d asked for had indeed been deducted from our account!  A flurry of internet/skyping left us virtually no further ahead.  We have our bank working on that one and will have to sort it out later …
The flight was packed … and it appeared that the competing airline flight that landed 30 minutes after us was also packed.  That adds up about right, because the islands receive on average about 160 tourists per day – 60000 a year!!   That doesn’t sound like a lot, until you’ve been on the islands and see the very limited infrastructure for handling that number.  We got some great sneak peaks out the windows, including a tiny island that Jake and Yvonne would dive at the next day.

The first order of business upon arrival at the airport on Baltra Island is to pay US $100 National Park fee.  Pretty steep.  But clearly it is not a deterrent to tourism, and the Park has their hands full in their introduced species eradication and marine monitoring programs, so if the money is being used wisely, no problem.  The largest center in the Galapagos Islands is Puerto Ayora (pop. 12,000) which is at the southern end of Santa Cruz island.

The airport is at the northern end of Baltra Island (remember you can enlarge any image by clicking on it).  By the time we drove across Baltra, took the short ferry to Santa Cruz then drove the 50 minute bus to Puerto Ayora, I got to wondering why the airport could not have been located on Santa Cruz, close to Puerto Ayora, because the island is relatively flat near the coast.  But it turns out that the US built a military airport on Baltra to help watch the Pacific during WWII, and this facility morphed into the existing civilian facility.

Puerto Ayora is basic, with a rapidly expanded population, but the waterfront is nicely developed and tourism planning facilities abound. Yvonne and Jake quickly got to work booking their SCUBA dive the next day, while Kaia and I lined up a double kayak to explore in.
We had a quick introduction to wildlife in the Galapagos when we saw a half dozen sea lions lounging on the town wharf.  Oblivious to gawking tourists.  And not 30ft away a group of equally indifferent marine iguanas.  We would be seeing lots more of these guys in the days to come!

Yvonne and Jake had 2 great dives on sites just north of Santa Cruz.  This was their very 1st dive (since certifying) so they had their own dive assistant which gave them confidence.  As a 12 yr old Jake is certified to only 40 ft (as opposed to adult 60ft) so they stayed within those bounds.  But still saw tons …. white tip reef sharks, school of manta rays, green sea turtles, and tons of colourful fish.

Meanwhile, Kaia and I set out in our kayak with snorkels.

He had a great laugh as we paddled out of the harbour and saw how crafty the sea lions were in staking out comfortable lounge positions. 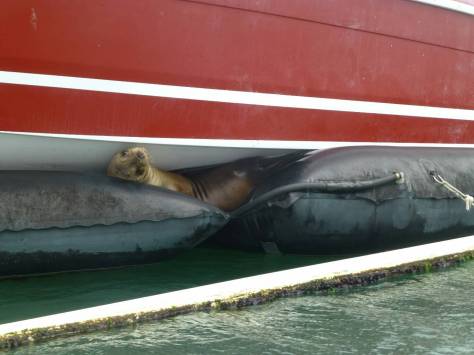 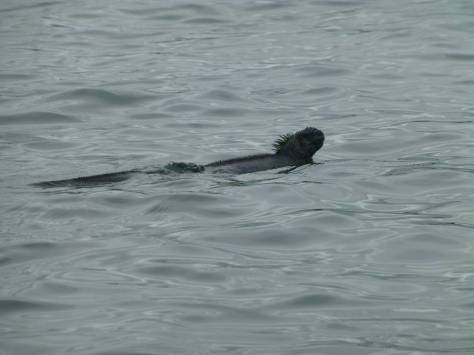 We paddled across some bays and through some interesting coves and saw lots of the Galapagos birds, including our first blue footed boobie.  These guys are probably the most famous wildlife of the Galapagos Islands, and you can imagine how much fun the t-shirt and post card designers have with the “boobie” spin-off jokes.

We donned our snorkelling gear and headed out on a reef, seeing some great fish.  Kaia is rather afraid of fish, so she clung pretty tight to my hand.  But as she got used to them, she was able to navigate solo through schools of them.  But nothing could have prepared us for the sight as we turned our heads to see a GIANT (5ft long) green sea turtle swimming right beside us – we could have reached out to touch it.  Actually, we had to swim away from it to prevent bumping into it.  Hard to explain what it’s like swimming next to these gentle giants.  I went ashore to get my GoPro camera (to learn it was out of battery 😦  )   and within another few minutes we either found another turtle or re-found our 1st guy, and swam for 5 minutes with him.  That pretty much made our day, so we headed back to town and felt like we had something to talk about when Jake and Yvonne got back and shared their diving adventure.

We had time after reassembling to hike the 2.5 km to Tortuga beach.  Beautiful clear water, white sand and great fun in the waves.
We visited the Charles Darwin Research Station and tortoise breeding station the next morning.  Galapagos’s famous giant tortoises are actually under great threat (more on that later), so they’ve resorted to collecting eggs and incubating and hatching them onsite. 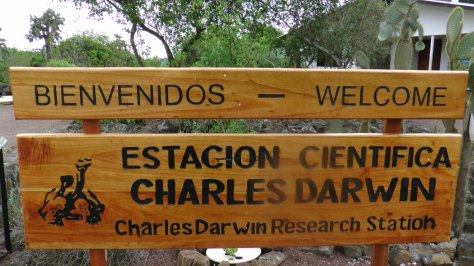 We were excited to leave Puero Ayora before lunch because we were headed to meet our cruise boat – the Floreana.  It was waiting for us in the Itabaca channel (which we’d crossed a couple days back).

Nice boat!  There are 5 classes of cruise boats for the Galapagos.  We were in the middle “tourist superior” class.  We were told by so many people and guide books that you get what you pay for in the Galapagos, and if you want a good itinerary, a good, English speaking guide (so important!), decent food, ventilated cabins, and not too much bouncing around at sea, you need to avoid the bottom class or two.  Yvonne’s mom Betty had hoped to join us for this part of our trip, but in the end decided that the going from ship to zodiac and ashore from zodiac and rough trails would be too much for her mobility.  But she instead helped us out financially with the Galapagos trip … we otherwise would likely have been in the economy boat.  Thanks, Betty!
Onboard we met our travel mates for the 8 days.  A middle age couple from Switzerland, a father and 20-something daughter from Germany, a couple of younger women also from Switzerland, a young couple from Australia, and a couple of VERY energetic, traveled, fit and game senior traveling companions  from Victoria, BC and Minnesota.  They both reminded me of my own mom.  We were 14 in total.  Ship had capacity of 16.

We met our crew of 7 that evening at dinner.  Captain, mate, sailor, engineer, cook, purser/host/cook, and our guide Victor.  Victor had been guiding in the Galapagos for 21 years, spoke fabulous English, was enthusiastic about all our adventures and had a good sense of humour.  Rooms were small, with a bunk bed in each.  But dining area lovely, and great common lounge up top.
First trip outing was back to Santa Cruz island to visit the “El Chatos” Tortoise reserve.  Here you walk among the many many wild tortoises.  You can get as close as 2m to them … beyond which they do a little hiss then retreat into their shell. 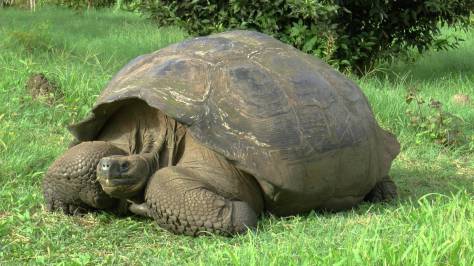 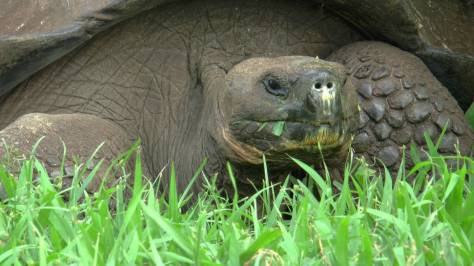 The attraction at this site are the “lava tubes”.  When this part of the island was formed, lava had been running through underground tubes.  When the volcano/lava retreated, it left quite remarkable tunnels.

Then back to our ship for a celebratory drink and dinner, then set sail for Genovesa Island in the north.  So all these adventures …and we hadn’t even started our cruise!  A good omen for things to come.