We arrived back in Cusco last night from our Ausangate trek (starts 2.5 hrs from Cusco). 1st day was great, and we camped at the base of the mountain, in full view of the main glacier. Kaia started feeling bad at dinner though, and was really sick in the morning – she had the symptoms of altitude sickness. I was really so-so. But we camped at 4300m, and were to go to 5200m that day, so we decided to skip the circuit, and instead hiked beside the mountain and came back at the end of day 2. Kaia and my dad are pretty sick today so it’s a good thing we turned back.

now, back to the Galapagos Islands …

When we first arrived at the airport on Baltra Island, I was surprised.  I imagined the Galapagos islands to be lush and green with plenty of animals everywhere.  But what we first saw was practically a desert.  It was flat, dry, the only green vegetation were a few cacti, and there was not an animal in sight.  We took a 10 minute bus across to the channel between Baltra and Santa Cruz islands, took a short ferry across the channel, then a hour-long bus to Porto Ayora on the southern side of Santa Cruz.  About halfway across, the green trees started to reappear, and by the end of the ride we had already seen 3 giant tortoises by the side of the road, but I was surprised that so many tourists from all around the world came to see this.

Then I went SCUBA diving.

We knew that the dive boats left early in the morning and that we had to be well rested, so my mom and I went looking for a company soon after we arrived and found a hostel in Porto Ayora.  We booked one that went to Seymour Norte and Daphne Menor islets, which turn out to be right near Baltra Island, where we came from.  We tried on wetsuits and flippers, and got everything ready for the next day.  The boat left from Porto Ayora, and went around the east side of the island to the first dive site of Seymour Norte.  It took about an hour and a half, but it gave us the chance to learn the hand signals for marine life.  There was one for shark, sea turtle, hammerhead, moray eel and many more.  We also got to meet our fellow divers, including a couple from Australia who would be on the same cruise that we would be boarding the next day.  There were 8 divers and 2 divemasters, but since I’m only 12, I’m only allowed to dive to 12 metres (40 feet), so that’s all my mom got certified for.  And, it was our first dive since getting certified in Costa Rica, so we got our own divemaster because the others were going with the other divemaster down to 18 metres (60 feet).  My mom and I started worrying that we couldn’t remember in what order we had to attach our stuff to other stuff, like the regulator to the BCD, the regulator to the tank, making sure the pressure gauge worked, and so on.  But the divemasters and the helper on the boat got everything ready for us.  I guess it was just for the certification that we had to do everything ready ourselves.  All we had to do this time was sit on the edge of the boat, let them put on your BCD and flippers, put your mask on, regulator in, and fall into the water backwards.

Let me tell you, the underwater part of the Galapagos is completely different from on land.  It really seemed like an underwater jungle.  First, we saw a huge “garden” of Galapagos garden eels.  They get their name because they live in a little hole, with their heads poking out.  We watched the other divers swim over them.  When they got close, the eels stuck their heads in to their holes until they passed by (we couldn’t go deep enough to pass right above them).  We swam along a bit, then found ourselves above a enormous school of manta rays.  There were hundreds, all about a metre long.

Then, we went to a shallower place, and got to see white-tipped reef sharks up close.  They were between 1 and 2 metres long, but weren’t dangerous at all. 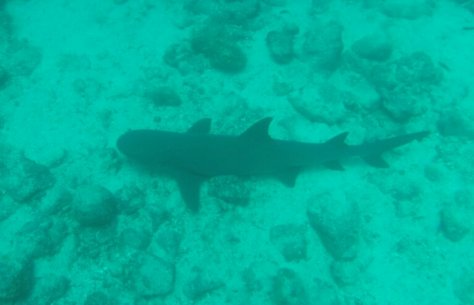 We swam through schools of colourful fish and saw starfish and stingrays on the bottom.  It was so cool! 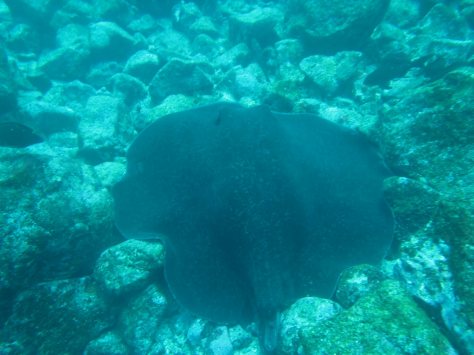 After about 30 minutes, we were getting low on air and had to come up.  The other group finished just before us.  On the boat, we had a snack as we went to the second dive site, the islet of Daphne Menor.  There were blue-footed boobies and sea lions on the rocks, but unfortunately, they didn’t feel like coming swimming with us.

Again, everything was ready for our second dive.  We got new tanks so we could dive for the same amount of time as the first.  On that dive, The thing we wanted to see the most was a sea turtle.  We were seeing lots of fish and starfish and sharks, until we got all excited because our divemaster Byron did the hand gesture for sea turtle.  It was lying on the bottom, then it started swimming.  It did a big circle around us.  Just as we thought it would swim out of sight, it turned a bit and we could see it vaguely.

We saw many more sea turtles in the next few minutes, a few of them together.  We saw 2 metre long Galapagos sharks swimming near the surface.  A few eagle rays swam right under us at the end of the dive too.  It was such an awesome day! 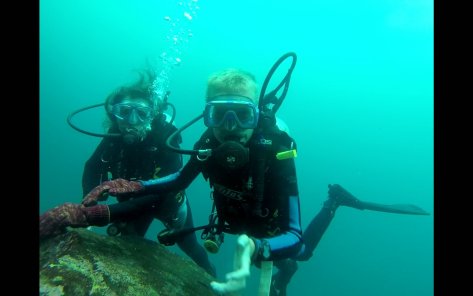 So, that was my first dive, Galapagos.  Next up: Fiji……….Vanuatu maybe………….Great barrier reef in Australia………… I think I’m off to a good start!

The next time we explored the underwater world of the Galapagos was on our cruise.  Every day, we’d go snorkeling usually twice.  I liked what we saw on land.  The birds, the giant tortoises, they were all cool.  But I loved what we saw in the water.  There were sharks, small stingrays, and countless types of fish.  I identified many of them from the movie Finding Nemo.

The fish were amazing!  They were so colourful and abundant, and were hardly scared of us.  I could have caught one with my bare hands if I really tried!  But there was much more than fish underwater.  There were the sea turtles.  On the SCUBA dive,  I only saw them for a few seconds.  But at Punta Espinosa, in the Bolivar Strait between Fernandina and Isabela islands, they were everywhere!  I probably saw about 30 that day.  We snorkeled twice that day.  First, on the Fernandina side, I saw about 10.  Some were alone, but I saw a group of 4 at one point.

Then, we went to the Isabela side of the strait.  We went snorkeling again upon arrival in Darwin Bay.  This time, our guide Victor guaranteed we’d see sea turtles.  The visibility was incredible, and it was very shallow.  I think I might have seen more sea turtles than fish that time! 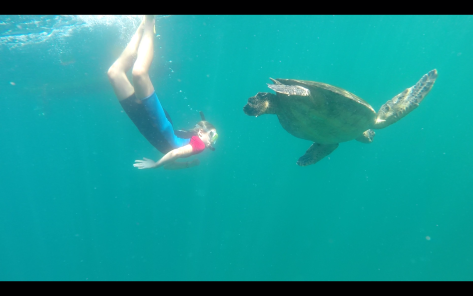 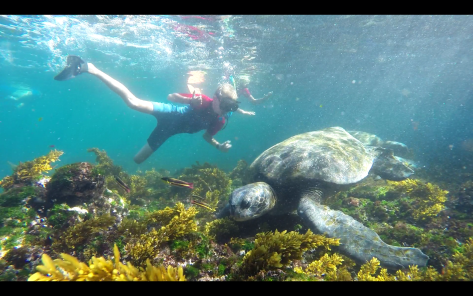 Here’s a short video of us swimming with the turtles: http://youtu.be/X2gcJDRzhnw

At a certain point, we wouldn’t even stop to look at them anymore.  Don’t get me wrong, they were really awesome, swimming so slowly and seemed so laid back, but once you’ve seen about 5 in the last 30 seconds, they start getting a bit boring. Who would’ve guessed that sea turtles would ever get boring! I once was swimming along when I saw everyone gathered and looking down at the bottom.  All excited, I came up to the surface and called: “What do you see?”.  Someone called back: “A sea turtle”.  “Oh”, I said, disappointed.  Just a sea turtle.  Same old.  There was more exciting stuff to see than that.

A rarer thing we saw though were Galapagos penguins.  When you think of penguins, you think of Antarctica, right?  Well guess what?  There are penguins in the Galapagos, which happen to straddle the equator!  The cold current coming north from Chile allows them to live here.  In fact, this is the entire reason why there is so much marine biodiversity in the Galapagos.  The warm current coming south from Central America collides with the cold Chilean current, allowing both warm-water animals like sea turtles and cold-water animals like penguins to live in the same place.  We had seen them from the boat a few times, hopping along the rocky shoreline, and into their little lava cave houses, which were formed many years ago by flowing lava after an eruption. but a few times, a small group of them swam right by us while we were snorkeling. Unlike sea turtles though, penguins eat fish, not algae, so need to be a lot faster, more agile swimmers to catch their food.  When we saw penguins swimming, they were just passing by and were only curious about us for a few seconds before swimming away.  But they were not scared of us at all.  As my dad was filming them with our GoPro camera out on a stick, one of them swam up and tapped the camera with it’s beak!
Here’s a little video of that: http://youtu.be/TkR9k1qVjnM 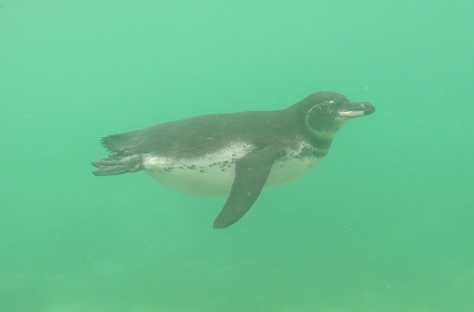 There is so much to see and do in the Galapagos.  It is a one-of-a-kind place on earth where life lies in a perfect balance on land and in water, with very few natural predators.  But if you’re ever in the Galapagos, thinking the experience wasn’t worth the money, you probably haven’t seen the islands from the underwater point of view yet.

One thought on “Galapagos: a hidden underwater world”