Yes, we wish you all a Merry Christmas from Vanuatu.  The blog title is Bislama, which is a pidgin English.  Yufela – you fellas … gudfela  good people.
Update Dec. 26th: We tried to post this yesterday on Christmas day but we’ve had virtually no internet access.  We just arrived back to the capital city and we’re back online.
—————————————————————————————-
We are on the Vanuatu Island of Epi and we are having a WONDERFUL Christmas day!  FYI, we are 16 hrs ahead of you time-zone wise.  We’re going to bed Christmas day while you’re just waking up Christmas morning.
For the past 4 days we have been staying in Lamen Bay – a really warm, welcoming, laid back village of about 400 people. There is one little guest house in town run by a family (dad Tasso runs the show) who really took us in and made us part of the community.  We originally had planned to travel to the south end of the island on the 24th, but the one guest house there is not really near the local community, and we heard that Lamen Bay was having a carol singing night at the church and a big community lunch, so it was an easy decision to push our trip across the island back a day to spend Christmas with the village.
Christmas Eve, after a big fish, yam, cassava & rice dinner we went to the church where the entire community (including those from the other 2 Christian churches) had gathered.  Tasso sat us in the front row, and we were welcomed in the opening remarks.  Tasso said that they had never had tourists stay in Lamen Bay for Christmas before.

After many carols, skits, a few poems and a short story, it was time to light our candles (everyone had brought one).  The gathering looked so fantastic.

That was then followed by the most energetic round of “We wish you a Merry Christmas” I’ve ever heard, then we recessed out of the church with our candles into the star filled night singing “This little light of mine …” with a little twist “let it shine over Lamen Bay”.  A 15 minute walk brought us back to the guesthouse where we had a little starlit swim before bed.
We awoke to find that Father Christmas had indeed passed through Epi Island (Kaia and Jake’s ecuadorian hats were full of candy and banana chips!) then were greeted by Jake’s gift of “smalads” for all of us.  Jake will explain more about these in a subsequent Fiji blog entry, but simply they are dishes of things to be smelled – not tasted.

We then headed to the ocean to wish the resident sea turtles a Merry Christmas.  The water was crystal clear, and we’d see 3 or 4 at a time, and a couple of the more relaxed turtles let us dive down to touch their shells (we had never tried to do this before).

Tasso and wife Legon had prepared a big breakfast for our family and theirs, and had decorated the dining room with balloons.  Kaia says they really know how to do breakfast in Lamen Bay because we had pineapple, pancakes, lemon meringue pie, cake and cookies!  She says she’s going to learn how to make lemon meringue pie for next year’s Christmas breakfast.
Following our family tradition from home, we did our gift opening after breakfast.

Gifts began with a surprise presentation by Kaia and Jake of a song they wrote and sang for us.  For each verse they held up some accompanying artwork (included below).

They typed in their song earlier today … 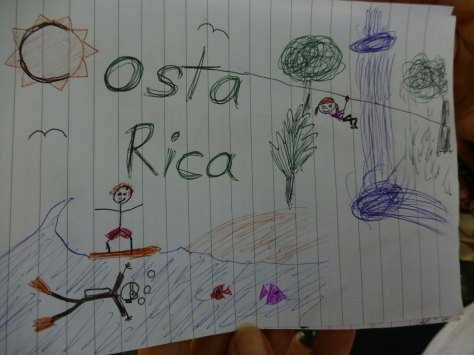 We loved it.
Gifts were very modest this year, of course.  Jake, Kaia and Yvonne were given new Vanuatu shirts while I was given a new DVD that describes the story of a tribe on one of the Vanuatu southern islands (Tanna) that is trying to hold onto its cashless, clotheless, traditions in the face of growing pressures to modernize.  Kaia had sweet treats for Yvonne, me and Jake.  The to/from card that Jake made for me was priceless.  A week earlier we had trekked into a VERY traditional village on Santo island, where 99% of their needs are met by the surrounding forest, gardens and streams.  Including men’s loin cloth “malmals” which are made from the inner bark of a tree.  I went “native” and dressed only in a malmal for 2 days.  So here’s the card. 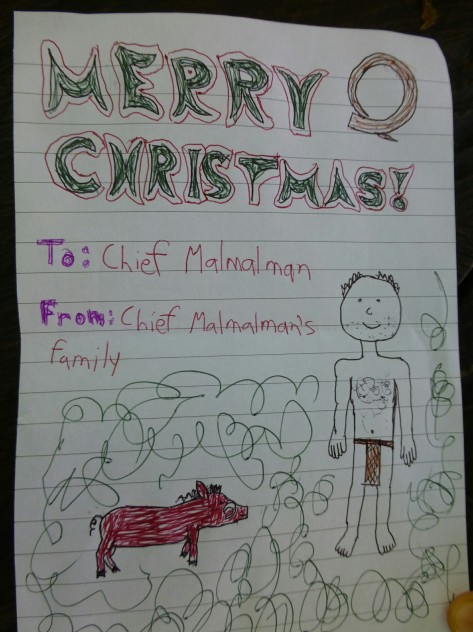 Lamen Bay celebrates Christmas day with a huge community lunch feast.  Men prepare stew and rice while the women make pudding and vegetables.  All are welcome at no cost, and that included us!  The whole community eats on mats on the ground. 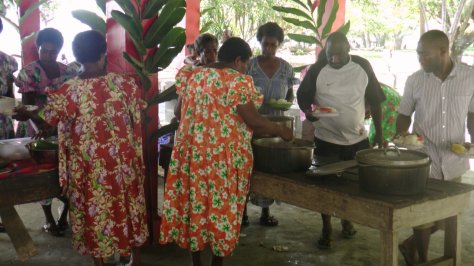 We said our goodbyes around 3PM and drove the 25km (1.5 hrs) to the south end of the island.  We split the cost of the trip with some folks from Lamen island who were driving down to purchase a cow to eat the following day.  They call the 26th “family day” … which speaks volumes about their priorities.  We told them about our “boxing day”, and they looked a little bewildered.  On the drive south we passed many beautiful little villages, all celebrating Christmas with games (lots of tug-o-war) and communal meals.

We arrived at the Epi Island Guesthouse in Valesdir around 5PM – we’re camping on their beach.  Lovely sunset. (followed by a surprise downpour …. sure wish we had put the tent fly on before that 😦  ).

We send our best thoughts to all our family, friends, and anyone else who has stumbled onto our blog.  We hope you feel some of the warmth and good will that we do right now.

ps.  we fly on a little 10 seater plane back to capital city Port Vila tomorrow PM, then onto Auckland New Zealand on the 27th.

pps. here is a travel-inspired twist on a carol for you …

12 Days of Christmas in The Douglas Family
By Kaia Douglas