Rhonda, Henry and Ben were determined that we go to the Navatua caves, an hour boat ride away from Tavewa. Near the end of our stay in Fiji, we realized that we hadn’t been yet! Every day seemed too windy for the boat ride, but on one of our very last days on Tavewa, we decided that it was either go in the wind, or don’t go at all.
The boat ride was extremely wavy, which was actually quite fun! We went past a few resorts and villages along the way. 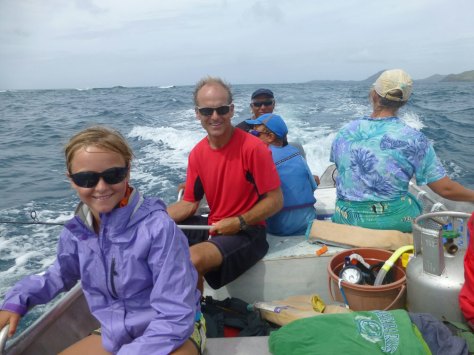 An hour later, we were there. There was a small entrance fee, then we entered the limestone cave! Mask, snorkel, waterproof flashlight and GoPro (underwater camera). Let’s go.

There were a few otherpeople there when we arrived. Henry and Rhonda had told us about another cave attached to this one, one where to get in, you have to swim under a rock for a few seconds, then come back up. Ben was very excited because he had only done this once before, and he was looking forward to doing it again. My family was very anxious! Even though you’re only under for maximum five seconds, swimming under a hanging cliff and coming back up in a very dark cave was definitely out of my comfort zone! Henry went first. When my turn came, all I could see of where I was going was the beam of light from Henry’s waterproof flashlight. I was quite scared, but I took the plunge. Henry’s hand on my head guided me to a safe place to come back up. It wasn’t as bad as I thought it would be! As Jake mentioned in an earlier entry, when my Gramma’s cruise visited the caves, she went into the next cave as well! We were very impressed, Gramma!

Next, we explored that cave. There were many nooks and crannies in there, so we spent a long time looking in corners and finding chambers and stalactites.  We sang together in an echo chamber.  The waterproof flashlights were very important! There aren’t any good pictures, so I’ll put one in to show you how dark it was.

Getting out of the second cave was much easier than getting in, because you can actually see where you’re going!

Then they showed us another, smaller chamber, and by then I was much more comfortable with diving down under a submerged rock wall and coming back up.

What a great spot! We had so much fun there. The Navatua caves were definitely a highlight for all of us!

After the caves, we went to a beach for lunch and some snorkeling.

Before heading home, we visited the village of Navatua across the channel.

We brought Kava as a gift. Some local girls showed us around. 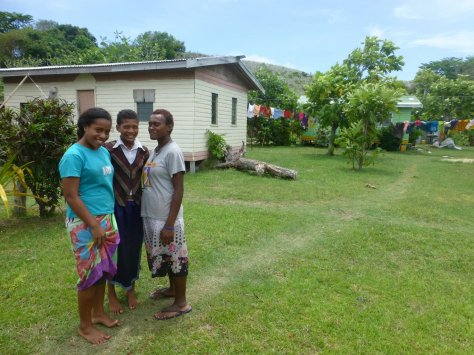 The villagers were very friendly, and the chief gave a long thank you speech for the Kava we brought. When we were saying goodbye, we got our first Christmas greetings of the year, in the first week of December. It’s refreshing to see communities that celebrate Christmas without all the consumerism. We trolled for fish on the way back to Tavewa, with no luck. We had an amazing day, but it would have been better with fish for dinner!
Kaia