We are nearing the end of our time in New Zealand.  In three days time (well actually, three days have now gone by – we are at the airport) we fly out of Christchurch on our way to Cairns, Australia.  I’m typing in Mueller Hut on the South Island, high up in the mountains.  It’s the first time we’ve been in snow since last April when we were still in Canada.  From here, we can see Mount Cook, New Zealand’s highest mountain. 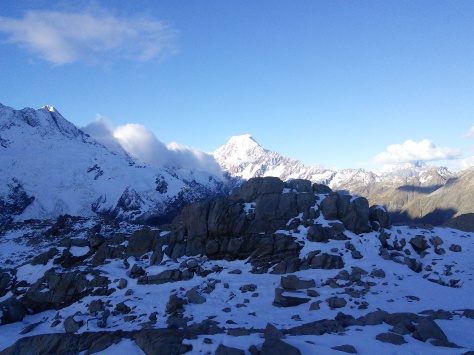 We had had a great time on Santo, but we had time to visit one more island in Vanuatu.  Any island would do because they all have great stuff to do.  My dad spent 3 hours looking on the Air Vanuatu website for a flight from Luganville to another island with availability, but because all the people who worked in the bigger centers like Port Vila and Luganville were going back to their home islands for Christmas, the Air Vanuatu flights were completely booked up.  It turned out that the cheapest way to get to any island was to charter a flight to Epi, an island about halfway between Santo and Efate (I never thought chartering an airplane would ever be the cheapest way to get somewhere!)  We wanted to go to this island because there was a good chance to get to swim with dugongs, what we call manatees in North America.  There’s one there named Bondas who is very well known for his friendliness and curiosity towards humans.

In the morning, we went to the Luganville airport and met our pilot Paul, a New Zealander.  Since the plane was so small, we and our luggage had to be weighed and Paul loaded the plane carefully so that it would be balanced just right. 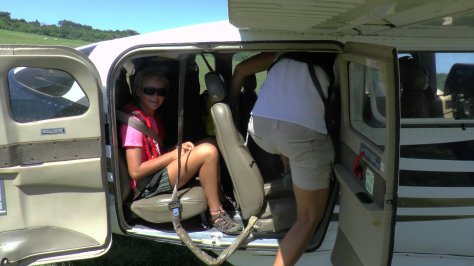 We got into the plane and taxied to the runway, and off we went! 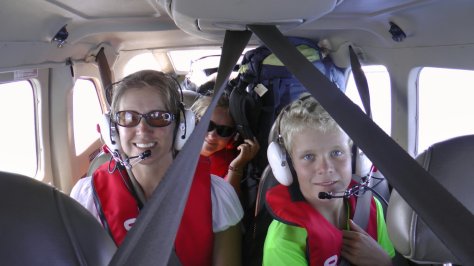 The flight took about 45 minutes, then we arrived in Lamen Bay, Epi’s biggest village, located on the northwest coast.

We watched Paul take off again on his way back to Luganville, then took a quick truck ride to Paradise Sunset Bungalows, one of only two guesthouses in all of Epi, and the only one in Lamen Bay.  We were the only people staying there. 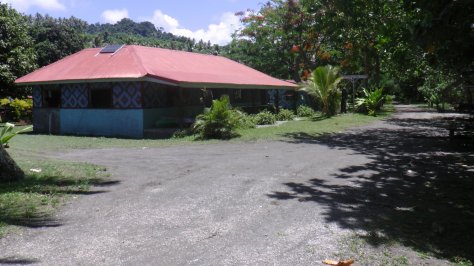 Tasso, the owner of the guesthouse is a Lamen Bay local and was there to meet us when we arrived.  The guesthouse is right on a nice beach. The room was nothing fancy, but it was clean and there were beds for all of us (pretty unusual in Vanuatu, most nights, either me or Kaia had to sleep on an air mattress on the floor).
The guesthouse is a family business.  Tasso’s wife Legon did the cooking, as breakfast and dinner were included for every night we stayed.  Breakfast was always delicious pancakes with fresh fruit like pineapple, mango, grapefruit and papaya.  Dinner was a variety of meat, fish, and root vegetables like potato, taro, cassava and delicious yam patties. 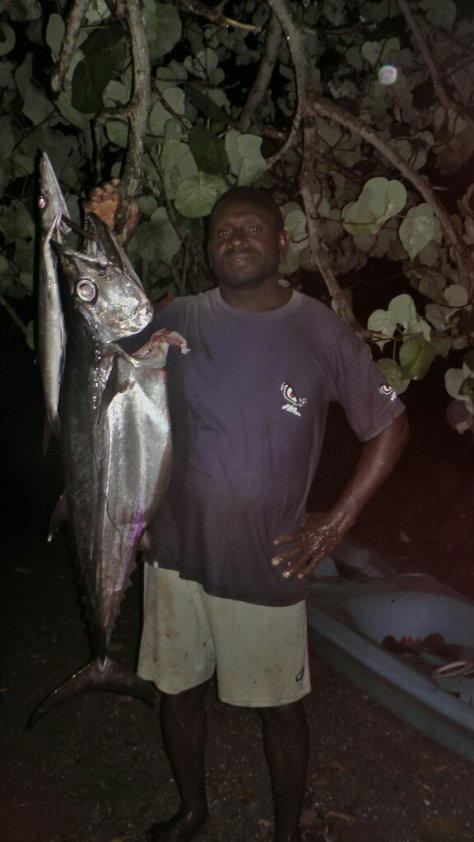 There’s a lot to discover around Lamen Bay.  Of course, there are the dugongs, which we looked for several times while snorkeling.  We looked in a certain place at high tide where and when we were told we had the best chance to find them.  We never found a dugong unfortunately, but the bay is full of sea turtles!  They like to eat the short sea grass on the bottom, which was shallow enough for us to dive down to.  Most of them would swim away if we got close to them, but a few didn’t mind us getting close to them and even touching them! 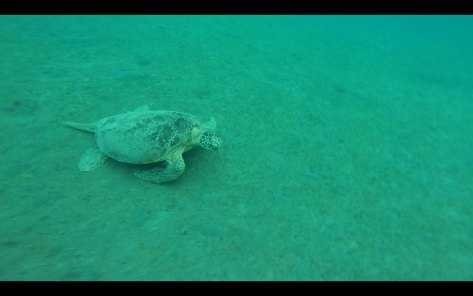 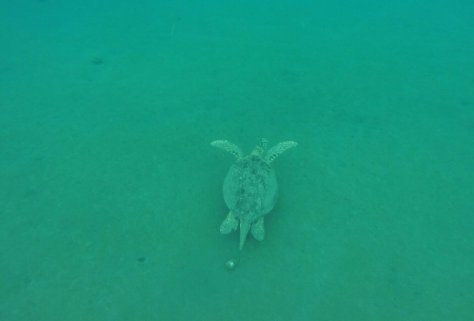 By the time I would reach the bottom where they are, I would already be running out of air so I couldn’t touch them for long, but a few of them let me dive down to them several times and they wouldn’t swim away.

Tasso showed us his grapefruit tree.  The fruit were huge! 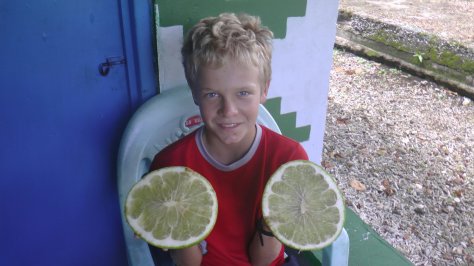 Tasso’s son Joshua also showed us a pair of puppies that one of the dogs had given birth to a month earlier.

Geckos are everywhere on the walls of Vanuatu in general, and one morning, we noticed one had jumped onto my dad’s shirt, then crawled up into his hair!  We picked him up and let everyone hold him. 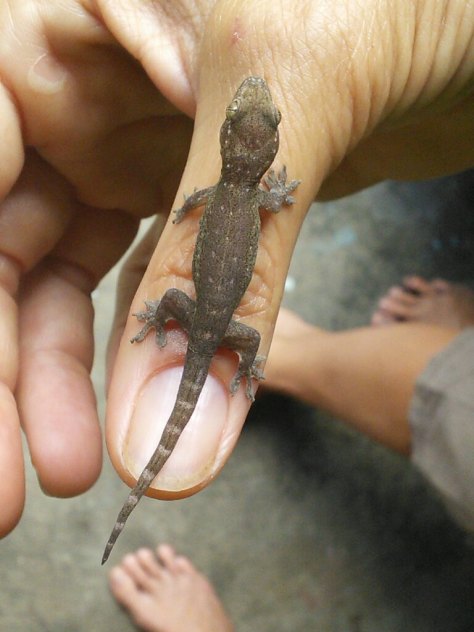 One day, we went to see Lamen Island across the bay.  About 500 people live there.  We hired a guy named Jimmy to take us across the bay in his boat.  We went snorkeling on a coral reef, then Jimmy ended up giving us a whole tour of the island and brought us into his house to meet his family and have some snacks.  The houses are still built with some local material, but they also have tin roofs and other modern tools and boats because a lot of them, including Jimmy and his brother, go to New Zealand for 4 months per year to work on grape vineyards and on apple and kiwifruit orchards. 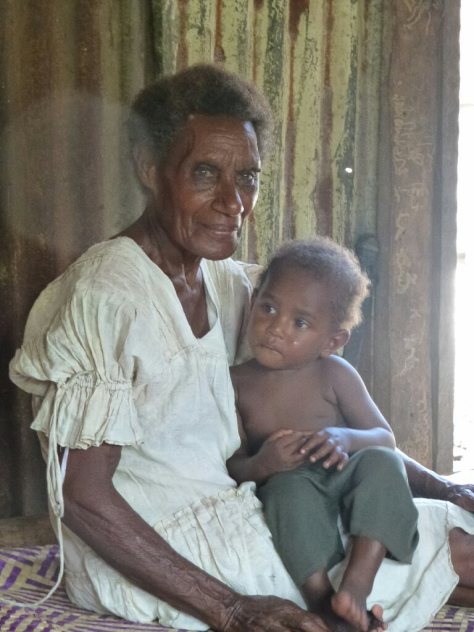 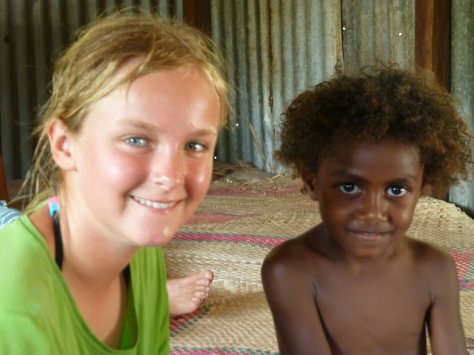 We spent Christmas in Lamen Bay too.  If you didn’t read our Christmas blog entry, here it is: https://1year1family1world.com/2014/12/26/we-wishem-yufala-wan-gudfala-meri-krismiss/

We loved Lamen Bay – it was so relaxed, friendly and beautiful.
On Christmas Day, we left Lamen Bay and went to Valesdir on the southwest coast of Epi.  Our flight was leaving from there back to Port Vila the next day, so we stayed at Epi Island Guesthouse, the only other one on Epi.  It’s owned by Alix and Rob, an Australian couple who’ve lived in Vanuatu for 18 years.  We were going to camp outside, but we left the fly off the tent and sudden rain made everything in it wet, so we ended up sleeping under a beach shelter.  We’ve put the fly  on right away ever since!

We took our time packing up because we weren’t flying out until the afternoon, which has been unusual on this trip.  The Valesdir airport is just as small as the one in Lamen Bay – beside a coconut plantation. 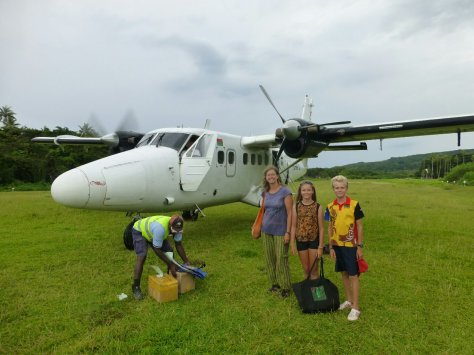 The flight only took about 20 minutes or so to Port Vila.
We didn’t really do much there that day and we went to bed early because the next morning, we had to get up at 4am for our Air Vanuatu flight to New Zealand.  Ale tata Vanuatu!

One thought on “Epic Epi”