Brief update:  We just finished a three day boat cruise in the Tanjung Putin National Park of Borneo, and we saw 15 orangutans. To give you an idea of how awesome it was, it is the highlight of the whole trip so far for me! The four of us are now scuba diving certified. Tomorrow we will go to Uluwatu in the south of Bali, then we fly to Philippines. If you’re wondering why we haven’t written in so long, we were preparing a presentation for the Green School of Bali. The presentation went really well, so now we can write in the blog!
————————————————–
Note to all travelers: when you arrive in the Denpasar airport in Bali, have a plan, know where you are going. We learned that the hard way. I didn’t even have the slightest idea about anything in Bali, and my parents had been there 15 years ago. Then the taxi drivers started coming at us. Luckily we had bought the Lonely Planet travel gguide on the phone earlier, so we read a few things about where to go, looked at a map and decided on going to Ubud.
Here are few facts about Bali-
Population: 5 million
Area: 6000 km2, or the size of the greater Toronto area
Languages: Balinese and Bahasa Indonesia (Indonesian language), but many people speak English too
Currency: Indonesian Rupiah (IDR). Exchange rate is 10 000 IDR = 1$ CAD
It’s hard to say what my very first impression was, but here are a few:
-We are back in the land of bad translations into English, so we’ll get some good laughs out of that
-The Denpasar airport is beautiful (the parking garage looks like a Hindu temple!)
-There are a lot of motorbikes on the roads! 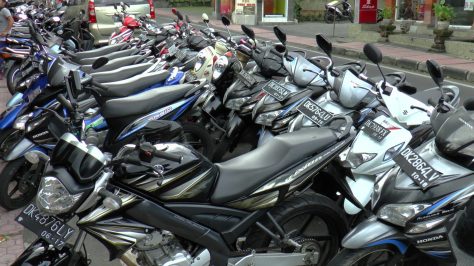 When we arrived in Ubud, I realized that Balinese architecture is amazing. The island of Bali is Hindu, so there are a lot of temples and statues.

In Ubud, we found a perfect little accommodation, called Kajeng Bungalows. Near the center of town, but on a quiet side street, good price, friendly staff, includes breakfast, and has an awesome pool.

On our first night in Indonesia, we were excited to be able to go to a restaurant, since New Zealand and Australia were too expensive. Here, you can get a great meal at a Warung (local restaurant) for 30 000 rupiah or 3$. And, Indonesian food is really good. Most of it is goreng, or fried. There’s Mi goreng (fried noodles), Nasi goreng (fried rice) Idak goreng (fried fish), and many others.

Another one of my impressions of Indonesia is that almost all the men smoke. Sometimes I feel sick because it smells so bad.
The next day in Ubud, we took some lessons at the library. They offer a variety of classes for arts and crafts. My mom and I chose Balinese dance, and Jake and my dad chose the Gamelan, a traditional Balinese instrument similar to a big xylophone or marimba. Now I’m going to try and explain Balinese dance to you, because it’s nothing like anything I’ve seen before.
It’s all about posture. At home, dance is very athletic, but in Bali it’s more of an art. You hardly move your legs, but your eyes, arms and fingers do the most dancing. Our teacher Kutuk was a really good dancer, and she taught us the Welcome Dance, a dance for women.

Here’s the link to a YouTube video of us dancing: http://youtu.be/V-JXjGs27Z4
Now I’ll let Jake explain how their Gamelan class went.
We met our teacher Nyoman and he brought us to a covered music room open to the outside.  It had every kind and size of gamelan, but my dad and I played the “standard” gamelan.  As Kaia said earlier, a gamelan is like a big xylophone.  You play it by hitting the flat metal bars with a wooden hammer, and there are bamboo tubes under each metal bar to give the sound a stronger echo.  Nyoman taught us a bit about its origin and importance in Balinese culture.  We learned that there are only 5 notes in one key on a gamelan, instead of the usual 7 on European musical instruments: dong, deng, dung, dang, ding.  I thought it was easy to remember, but my dad didn’t think so, or at least not the order.  Nyoman then taught us the first song in steps, and we eventually learned it by heart.  It’s was a slow repetitive tune, so it seems pretty easy while watching it being played, but you need to hold the metal bar you played last while hitting the next so the sound doesn’t drown out the next note, so you need to keep your mind on two things at once.  It’s also hypnotizing music, so if you really concentrate on the music you’re playing, your mind wanders and you forget to damp the notes, and then it’s hard to get back on time with the other people playing. 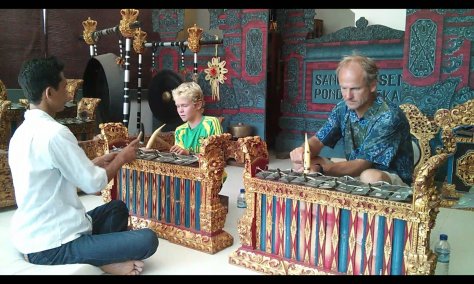 We then learned a second song, a little more challenging than the first.  Here’s a YouTube link to us playing: http://youtu.be/eClhHKOdI60
At the end of the class, Nyoman showed us his bamboo gamelan skills, a bit different from the metal ones we were playing.  Incredible!  He said he plays the gamelan every day, performing at a restaurant with a gamelan group.  I really enjoyed the class, and I think it’s a really cool musical instrument.
-Jake

After just one hour of classes, I think we all felt more connected with Balinese culture. It was perfect, because that evening we went to a dance and gamelan show, so we could relate to it a lot more. Let’s just say… the performers were WAY better than us!

If you are ever in Bali, watch where you step! There are little offerings to the Hindu Gods everywhere. They’re made with banana leaves cut and woven in a special way, and then some little things are put into them. We mostly saw flower petals, but we also saw candies, cookies, even cigarettes! 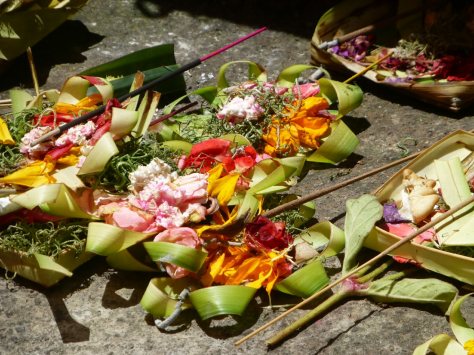 We learned that people in Bali are named after what number they are in the family. The first-born is named Wayan, the second is Made (pronounced “Ma-day”), and the third is Nyoman, so my dad’s and Jake’s gamelan teacher was the third born.
We’ve been to some places where they mix up certain letters. In Namibia, it was the “R” and L”. In South America, it was the “B” and “V”. But Indonesia is the first place I’ve been to that mixes up their “F” and “P”! We noticed this when we saw that Wood-pired fizza was on the menu at a warung in the Gili islands.
Our second day in Bali, we did a cycling tour where they drive you up to the mountains, and then you glide back down with a guide. In the group there was us, Tracy from England, Alana from Perth Australia and Hema from Mumbai, living in Dubai. And of course, our guide Made (so second-born child). It was a fun group.
On our way up we did a stop at a coffee and tea sampling place. This place is famous for its “Luwak Coffee”. It’s made like this:
1. The luwaks (small wild cats) walk around at night and eat the coffee beans from the plantation. Their stomachs cannot digest the coffee, so the whole beans come out in their poop.
2. Some people wake up very early every morning to collect this poop from the area.
3.They dissect the poop to take out the coffee beans, and then they clean them.
4. The beans are then roasted and brewed into coffee.
5. Each cup is sold for 50 000 rupiah or $5!
My parents didn’t try any because it was expensive. Also, they weren’t too sure how going through a luwak’s digestive system would make it taste different, let alone better…. we met some people later who had been to that  same place, and said that there was no difference between the coffees.
Anyway, the good news about that place was that they had about 20 different teas that you could sample. I’m not a tea lover, but man that was good. I can’t remember what most of the flavours were, but we ended up buying some lemongrass tea and some ginger tea.
We drove up some more, then at the top we stopped at a warung for some food. We had a view of a huge volcano right from our table!

Then we got fitted for mountain bikes and helmets, and we started gliding down. Sometimes we were on a big road, but sometimes we would go off onto tiny twisty hilly roads. The mountain bikes were important, because some of the roads were in really bad shape. On the twisty roads, I had to anticipate that there would be a motorbike around every bend, because there usually was one and they go fast. Before the biking, we had only really seen urban Bali, so it was great to see the rural part too.

Tracy was the first one to fall. Then Hema went down too, and my dad happened to have the GoPro going, so we have a great video of that. At the end of the day, Alana fell into a 1 metre deep ditch, then started laughing. It was a great day!
Of course, Bali’s main resource is tourism, but another huge one is rice. We made some stops along the way to see the people plant it. Made explained to us that “every pamily has its own rice pield”. 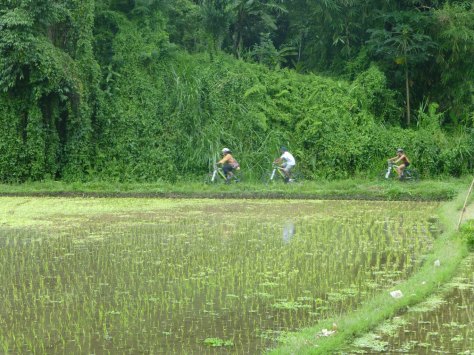 At around 3 pm, we had some late lunch before getting driven back to Ubud. We loved our bike tour, it was a great way to see more of Bali and get some fresh air.
The next day we got a taxi to the Green School of Bali, because we had a meeting scheduled with a middle school teacher. Now, I could go on and on about Green School, but we will leave that to a separate blog entry. Long story short, it’s a very environmentally conscious international school, built completely out of bamboo… it’s beautiful. We ended up doing a little presentation there a few weeks later. I won’t talk about that now… here’s a photo to give you an idea.

After seeing Green School, we got a taxi back to Ubud, but not to our hotel. We went to the Sacred Monkey Forest, a park in Ubud where a lot of long tailed macaques hang out (they get fed). The park was really nice, with lots of big tall trees, little creeks, Hindu temples, and macaques! 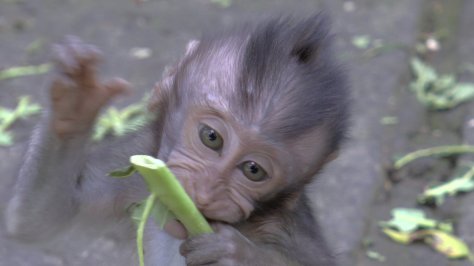 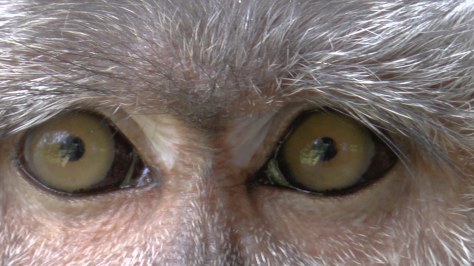 Bali (and Ubud in particular) is known for it’s massage, meditation, relaxation and yoga. Early the next morning, my mom went to a yoga class overlooking rice fields. She said that it was a really beautiful view, especially at sunrise. She really loved her class!

We’ve been to a lot of countries now, and we’ve met a lot of really friendly people. Some countries stand out, like Vanuatu. But I think we all agree that the Indonesians win the prize for the most friendly, open and smiley people. We feel very welcome here. Ubud was a great introduction to Indonesia for us, and we’ve done a lot of great things here.
Kaia (featuring Jake)