Jake wrote about our time in Komodo National Park.  Komodo takes in the islands/ocean immediately to the west of Flores Island, Indonesia.  We wanted to go to Flores because of Komodo and because we understood that the culture and geography of the island were outstanding.  Certainly Komodo Park more than met our very high expectations.  And I can say the same for the island itself.
We had read that islands roads are VERY windy and full of fast moving motorcycles and cars, so renting a car was not advised in the travel blogs.  There is a bus that cuts across the island, but most of the cultural sites are set well off the road into the jungle, so bussing it would miss much of what we came to see.  So we searched around and found a guy from Labuan Bajo who is both a guide and a driver (normally you have to hire 2 separate people) and this was the perfect way to go.  Not having to drive the CRAZY windy roads allowed us to relax.  But best was having the time with our fantastic guide.  I am putting his name and contact info here in case a reader is heading to Flores.  Alvin Ebot (62) 0812-4622-6999  adventianus84@gmail.com

We immediately settled in with Alvin.  His English is excellent, and he understood so well what Flores tourists were about.  We would co plan each day as we went, and his knowledge of the island, culture, issues and roads made for smooth sailing.  And man did he drive.  We commented in an earlier blog how windy New Zealand roads are.  But on Flores island if the road was straight for more than about 100m it was something that we’d notice and comment on  … “wow … nice piece of road here … can make some good time”.  I believe we averaged about 30-40 km/hr.
I decided to break my Flores blog entry into 5 pieces.  We saw and learned so much … and have lots of great images.  So here’s day 1.
1st stop – Cunca village and waterfall.  The road into the village plummets down more of a paved path than a road, for about 6km.  Alvin found us a guide who led us through the town and into the forest to descend to the river.

Macadamia nuts were in season, so many houses had them out front to dry in the sun.  I had never seen raw macadamias, and usually buy them in very limited amounts because of their imported cost.  So we were pretty happy to pick up a large bag of them for $2.  We offered to Alvin, but he noted that the oil in them put his stomach off.  I couldn’t imagine being put off by macadamia nuts … but more on them later! 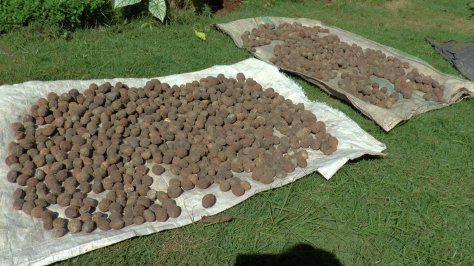 About 45 minutes of pleasant downhill walking brought us to river’s edge and along to the canyon.  The area had received a lot of recent rain so the river was not as clear as it usually is, apparently.  This had one important consequence … we couldn’t really see what we were swimming in, or jumping into.  The cliff jumping was about 100m upstream from where you could get to without swimming.  Alvin didn’t have a bathing suit, and turns out our guide couldn’t swim.  So we set off up river on our own. 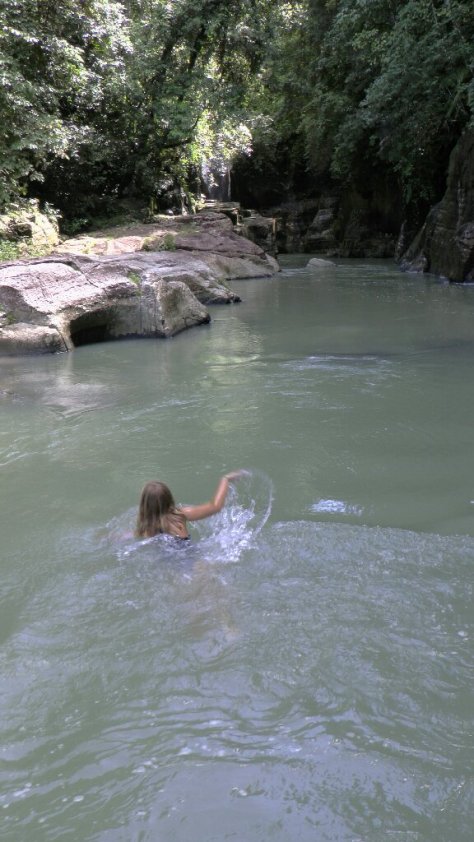 It really was a beautiful canyon.  We could swim almost to the foot of the falls before the current was too strong.  We spent quite a while submerging ourselves around the base of what we figured were the jumping  cliffs, and convinced ourselves that it was very very deep.  You know us …. can’t resist a chance to plunge into water!

It was about a 10m drop … just a little higher than Kaia and Jake are used to at our cottage.  But in this narrow canyon … oh what fun!  I took a few great GoPro shots … then accidentally deleted them a week later.  Picture a body plummeting down in front of a waterfall …        The refreshing swim was so welcome in Flores’s rather oppressive heat.  Of course, we were all sweaty again after the 45 minute hike back UP to the village!
I noted that the guide had dropped a foil cookie wrapper into the river … I plucked it out.  Then noticed that he dropped another along the trail … I picked it up.  He didn’t speak English, so when we arrived back in village we asked Alvin to translate that the presence of garbage would likely be noted in TripAdvisor write-ups, and tourist traffic may drop off as a result (OK, work with me here … I was trying to put it in a way that might resonate with him …) He nodded …sort of.  I don’t think any huge paradigm shift was underway in his head as a result of my observation 🙂
The village was so friendly, and many folks popped by to meet and talk with us as we sipped coffee at the guide’s house.  All were surprised to learn that Kaia and Jake, at 13 & 12, don’t yet drink coffee!  Kids there start when they’re 4.  It is, after all, grown all around the town and the island.
Back on the main road, we were again struck by the number of small motorcycles being used … to carry so many different things:
– up to 5 people (driver, wife & 3 kids!)
– a large wire cage full of chickens
– two huge pails full of fresh fish
– huge amounts of harvest from the garden
– a portable restaurant (imagine the kind of truck that pulls up to work location at break/lunch time and slides open its side panel … only small enough to go on the back of a motorcycle …)
We also very quickly noticed that so many road side residents would purchase gasoline then resell it in 1L water bottles.  It’s a long way between cities/gas stations,  and many people using their motorcycles just locally.  Anyone know how gasoline interacts with PET plastic?

By late morning, we were getting quite hungry, and Kaia and Jake both started feeling sick to the stomach.  We put it down to the empty stomachs and twisty roads.  Alvin felt bad as we stopped repeatedly for them to barf.  My stomach was a bit off too.   The real cause would elude us till the final moment of departure from Flores 5 days later.
A few more hours passed as we drove through incredible scenery – high, jungle covered mountains, perfect volcanic cones, and endless stunning rice terraces.

But the real point of interest that afternoon was the Lingko “spider web” rice terraces of Cancar just west of Ruteng.

This “lingko” system of land tenure used by the Manggarai people of western Flores has a huge area divided into “sectors” that radiate out from a central point.  Each sector is allocated to one family, and sector sizes (angles) are determined by the village head spreading his hand out – each space between fingers becomes a sector.  Many Canadian readers will recall the grade 7 history lesson about how the early French settlers along the St Lawrence river each wanted access to the river, so farm plots ran long and narrow from the river (the “Seigneurial” system – I still remember!) .  When land passed through generations, the plot would become even narrower when split for two or more sons.  This is what happens in the spider web rice fields.  Sectors get narrower and narrower.  But the areas are huge, so still enough rice to go around!

We arrived in the larger city of Ruteng in time to swing through the vibrant and exotic feeling local market.  Unlike others we’ve been to that are covered but otherwise open-air, the Ruteng market is entirely indoors, rather dark, and has smells I really couldn’t begin to pin down. 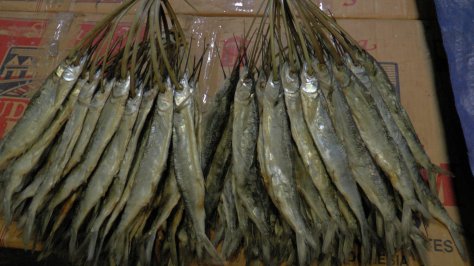 I loved this market.  Yvonne was a bit put off by the various odours.
Ruteng is a busy but rather charmless city in my limited time/experience there.  By the time we found our hostel, it was raining and all of our stomachs were still a bit off so we were quite happy to roll into bed early without heading out for dinner.  Alvin grew up in Ruteng so was quite happy to pay his parents a surprise visit.  Feeling as we did, we graciously declined his offer to meet and visit with them.
We continue east across the island on day 2 …
Cam