We arrived on the Caramoan peninsula of the Philippines’ Luzon Island this afternoon after 2 “tricycle” rides, 3 “jeepney” rides and a 2hr boat ride.  Survivor USA was filmed 500m from our little bungalow.  Other countries’ Survivor shows have also been filmed here and in a month’s time the Dutch are filming theirs here too.  So we figure the islands and beaches we’ll explore by kayak tomorrow should be kinda nice!

Flores Island’s very rugged geography meant that in traditional times there was not much interaction between villages. Eight distinct language groups and cultures coexisted on the island though they were connected through trade. Links to the outside world were made first in the 1200s with Javanese, Arab, and Chinese traders. The Portuguese took interest in the island in the16th century – they were developing their spice empire.  The Dutch also took notice of the island and others in the area and intense competition ensued – the Dutch won out and the Portuguese hung on to only East Timor. This set the stage for the rest of the colonial period leading up to Indonesia independence in 1949.
The Dutch colonial government tried hard through the 1800s and 1900s to “modernize” the island with education and cash economy.  They had only modest success, in part because it was difficult for them to infiltrate to so many remote villages.  More successful were the Dutch Christian missionaries – they were willing to live and work in the most remote corners of the island.  While 85% of Indonesia is Muslim (the largest Muslim population in the world), most of Flores is in fact Christian and devout Christian, from what we could ascertain.  We encountered only a few pockets of Islamic communities – living in fishing communities on the coast.  So our 1st island in Indonesia was Hindu (Bali), the Gili islands were Muslim, and Flores Christian.
Indonesia is HUGE.  7000 islands are spread vast distances from the capital in Jakarta.  So you can imagine that locals resent intrusion of a national government so far removed from their daily affairs. This challenge hit home poignantly just a little into our drive from Ruteng on the 2nd day.  There is a lovely lake that you can swim in just a little off the road.  There was a roadside viewpoint as well as a government run park/access to the lake.  The government was not pleased with small number of visitors/income it was receiving at the park facility, so managers in  Jakarta decided that they should get rid of the roadside viewpoint.  This way, tourists would stop to come in and pay at their park.  No consultation with the local folks and tour guides.  So how does one get rid of a road side viewpoint?

Yes, this wall was built at some considerable cost for no other purpose than to block the view to the lake.  You can see it is now covered with graffiti.  If you look carefully at the right side of the photo you can see where we parked our car to get out and  walk the 10 steps it takes to get around the wall to look at the lake.  Alvin assured us that every other tourist car does just the same thing. This wall has made Jakarta the laughing stock of locals and tour guides, and apparently several guides (including Alvin) have written letters requesting the wall removed.

We arrived an hour later at the south cost of the island at Mbalata beach where a quick swim in the ocean in the sweltering 35degC heat was so welcome.

Everywhere we drove on Flores island, be it on the main road or a tiny track into a village, we saw rice fields … and more rice fields.  The terraces are so striking looking.  Rice is far and away the main staple of the Indonesian diet, including Flores Island.  But it hasn’t been that way for so long.  Dry (upland) rice and maize were the staples traditionally, but the colonial influence and prodding for cash crops transitioned the island to “wet” rice which grows in terraced rice paddies.  Rice production goes something like this:

1. repair any breaches in the terrace walls 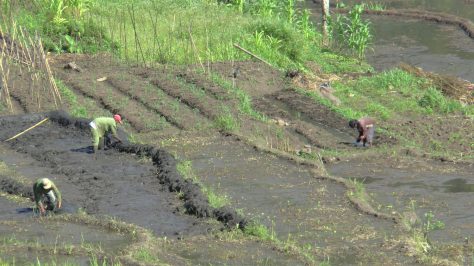 2.  Prepare the field/paddy for planting by turning over the mud.  We saw some people still using oxen for this task but most people new use these powered tillers (see below) 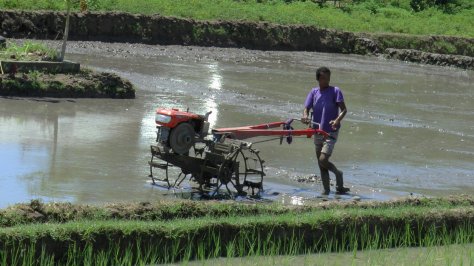 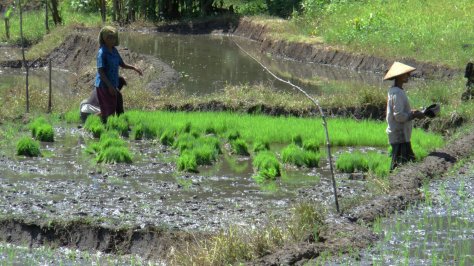 3. When seedlings are about 6 to 10″ tall, pull them up and put them in bunches for transplanting

4. Spread the bunches of seedlings out evenly in the paddy to be ready for planting. 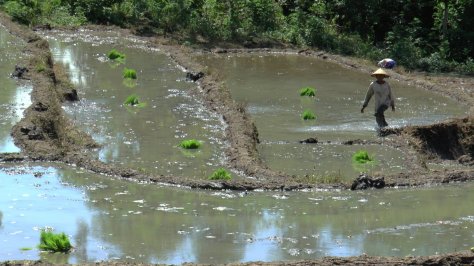 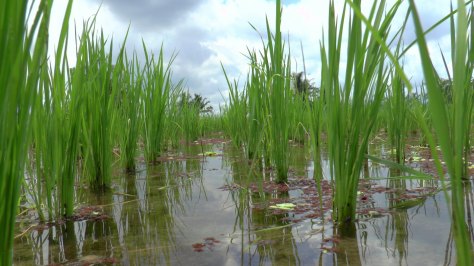 6.  Weed, periodically, and work the small irrigation canals to ensure good water levels.
7.  Spray with pesticides (they have the stuff on the backs and walk around pumping the containers … We saw them spraying two locations but didn’t see much in the way of protective equipment).
8.  Harvest 3 months after planting, using a sharp knife to cut the stalks off.
9.  Separate the grains from the chaff
10.  Dry the grains in the sun.  This is often done roadside.

11.  Separate the husk from the grain – this is more commonly  done now with small gas powered mills.

I was, and still am enamored by the beauty of lush green terraced rice paddies.  Here’s a few more from along the road on day 2.  Click on them for full effect. 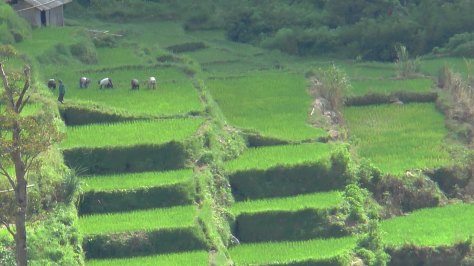 After lunch we stopped in the south coast town of Amare to see how the local “hooch” Anock is made.  It is a basic distillery story … palm milk is distilled down in home made contraptions … and you have your choice to buy 20%, 40% or 60% alcohol.  Smell of the strong stuff in 35deg heat rather put me off, so I can’t tell you what it tastes like.  But it is cheap and very popular.

They sell it in exactly the same bottles in the same  road side stands a gasoline.  Drink the clear stuff, put the yellow stuff in your car.  Alvin told us of one poor fella who bought the hooch by accident for his motorcycle … .didn’t make it 100m before the engine stopped …. and was toast.  He tells another story of one of his tourist clients wondering aloud to him why so many people are selling urine.

Flores is well known for how its traditional societies have maintained their beliefs, celebrations/ceremonies and village architecture, all the while participating in Christianity and the rapidly westernizing society.  Many villages welcome visitors, so we went to the Manggarai village of Bena.  As you descend to the village, you pass through fantastic bamboo forests. 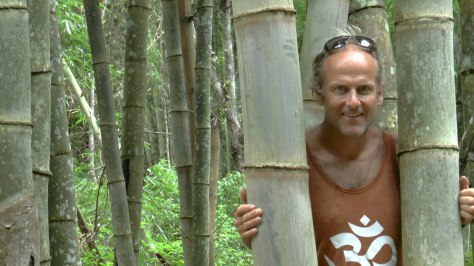 All this even more impressive with such a dramatic backdrop of mountains and forests.  We could have gleaned more from Alvin but we were getting hungry so headed off to our evening destination of Bajawa city.  Upon arrival at the hostel, Kaia and I tucked into those macadamia nuts to tide us over till we found a restaurant.  Well, by the time we found a restaurant, Kaia was barfing roadside and my stomach was off right through rest of the evening and night.  The owner of the restaurant we ate at was rubbing Chinese oils on Kaia’s back to help her along.  At first Kaia “tolerated” it to be polite.  But she started feeling better about 30 minutes and came to appreciate the gesture.  Still, we were not suspecting the macadamia nuts.  That story continues on our last Flores day.