The Lonely Planet guidebook suggests that half the fun of going to the Caramoan peninsula is the adventure of getting there.  After our successful snorkeling outing with the whale shark in Donsol, which Kaia described in the previous blog entry, we decided to head up to this area, known for its beautiful coastline and islands.  We got to the bus terminal with our big packs by motor-tricycle, then rode a minibus to Legazpi where we transfered onto a second minibus that took us to a town called Tiwi.

In Tiwi, we felt like a real spectacle — we hadn’t felt so stared at for a long time.  It turns out that Tiwi is not a very touristy place, but since we arrived too late to catch a jeepney to the next town, we would need to spend the night.  However, Lonely Planet doesn’t list any accommodation there, and there are no TripAdvisor reviews either.  We started asking around.  Eventually, someone said (with at least some certainty) that there was a place to stay about 3km out of town.  Back onto a tricycle went the packs and off we went.  Sure enough, there was a motel at the far end of town called the “Springs Resort” (formerly known as the “Hot Springs Resort” — maybe some recent tectonic activity cut off the flow, I don’t know!)  But they did have a pool, which was clean even though it was only about half full.  We swam and then caught a ride back into town to get dinner at the market.  It was our first experience with Filipino street food; somewhat puzzling since they served each type of food on a different plate and definitely didn’t want us to put any sauce, veggies or meat on the plain rice.  So we each ended up with 3 or 4 plates or bowls with portions of various things (rice, fish, beans, chicken, boiled greens) and sat down at a picnic table next to the food stall.  Then we really were a spectacle!
We were impressed with some people’s excellent English and american-sounding accents, and learned that the biggest industry in Tiwi is call centres.  So next time you call a customer service number to change your phone service or get technical assistance for your computer, you just might end up talking to someone in Tiwi, Philippines!

Back at the Tiwi Springs ‘Resort’, we were the only guests that night.
Next morning, we got a tricycle into town where we soon boarded a “jeepney” heading north.  Jeepneys are an amazing form of transportation:
– part taxi (you can hail it anywhere and just yell “para” when you want to get off),
– part bus (it seats about 12 people inside and a few more standing on running boards at the back),
– part jeep (the front looks like a jeep),
– part graffiti wall (they are painted in vibrant colours), and
– part church (they are generally full of religious paraphernalia, and I saw several women crossing themselves as they got in — although this probably has more to do with Filipino roads and drivers). 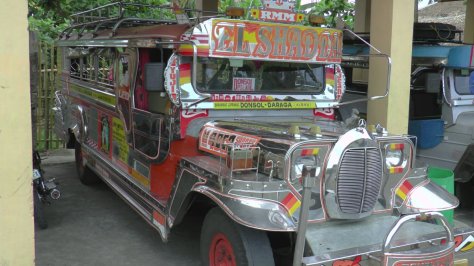 Three different jeepney rides got us to Sabang, from where we could catch an outrigger boat for a 2-hour journey to the port town of Guijalo.   Lonely Planet got it right — getting to the Caramoan peninsula is not straightforward and can be quite an adventure! 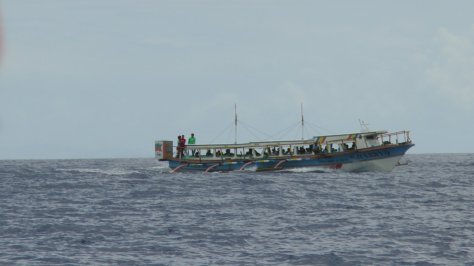 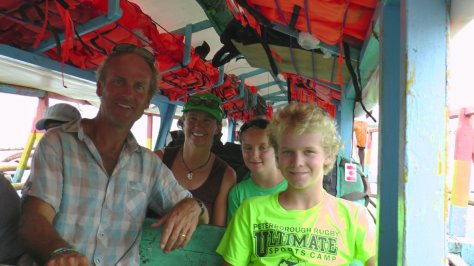 And we weren’t even quite at our destination yet — we still had to cross over to Paniman, on the north side of the peninsula.  We had hoped to rent kayaks for a couple of days, and Cam had been in contact with an outfitter, but we decided to play it by ear (we would see what the weather and waves were like before committing — how uncharacteristically prudent of us!)
The Caramoan Peninsula may be difficult to get to, but it is definitely “on the map” as it has been the venue for “Survivor Philippines” — you know, the reality show in which participants have to “outwit, outplay, and outlast” their opponents and teammates while hanging out, scantily clad, in stunning locales.  I knew about the American version of this show, but had no idea that almost every western country has their own version.  We saw photos from “Survivor France” and “Survivor Croatia”.  Apparently the Dutch version is due to begin filming here in about a month.  Luckily, our visit did not coincide with any filming because that would have meant that the islands were off limits.  As it was, we were able to rent kayaks from a neighbouring guest house and visit the beautiful islands and beaches where “Survivor” took place. 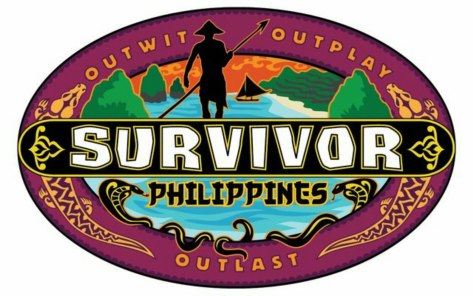 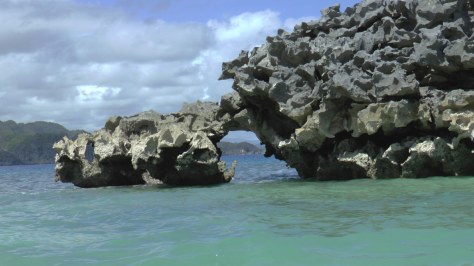 Unaware of how much infrastructure is required to stage a season of Survivor, we were shocked to see the village that was created solely for that purpose.

This is the beach in Paniman with many small boats ready to take people to the islands: 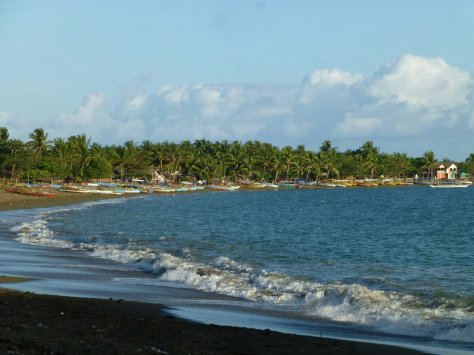 We stayed in a room at the “Mushroom Bar”, run by Dennis and his wife, Rizalie.  Dennis’ sister (whom we met) had spent 2 years in interior British Columbia, working as a caregiver for a man with Alzheimers.  With the money she earned there, she has opened a purified water refill station and helped her brother build his guest house.  She has applied to immigrate to Canada with her husband and 4 children.

While trying to go to sleep the first night, we were introduced to another Filipino obsession:  videoke!  Basically the same as karaoke and taken VERY seriously.  The neighbouring guest house had a videoke machine right on the other side of the wall and several customers who were very persistent but bad at singing harmonies!  It was a bit painful to listen to.  Even the earplugs didn’t block it out.
The next day, we went on a great day trip with Dennis and a German friend of his who also runs a guest house.  It started with a jeep ride (or motorcycle for Cam since there wasn’t enough room in the jeep — he didn’t mind because he got to drive!) 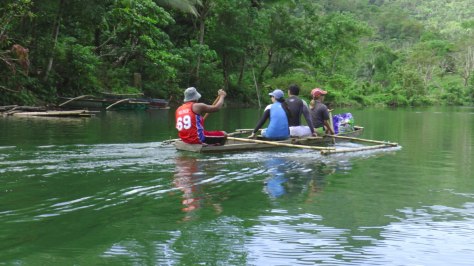 Then we paddled across a reservoir in local canoes, 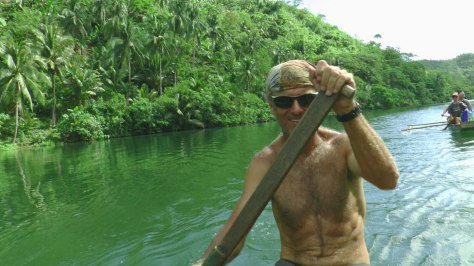 through lush jungle with simple homes, 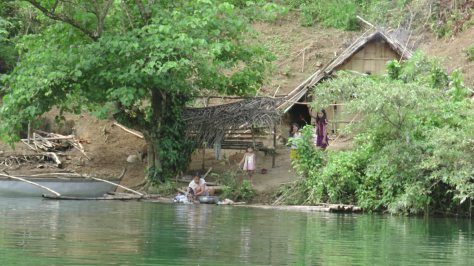 then hiked up beside the shallow river, 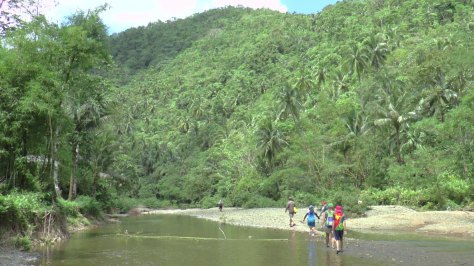 to get to a nice waterfall with multiple swimming holes. 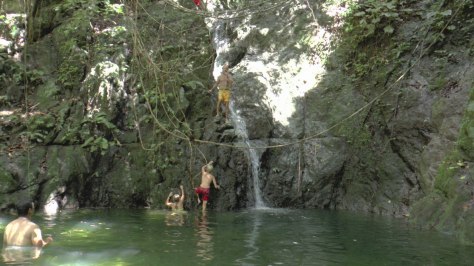 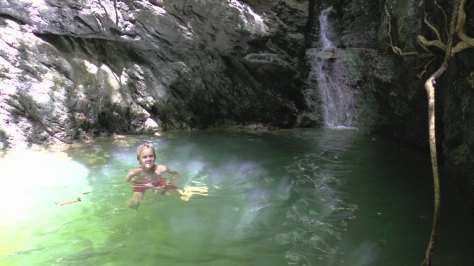 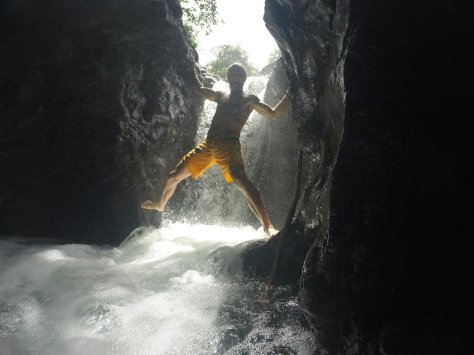 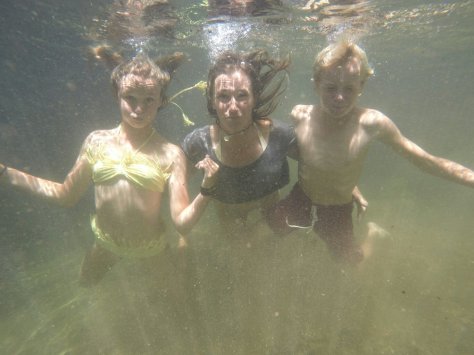 Dennis barbecued fish over a fire for our lunch that was served on banana leaves.

It was a nice day, and we finished it off with a drink at the Mushroom Bar.

We more than survived our Caramoan experience, and left in the same way as we arrived — on an overpacked tricycle, beginning another epic travel day!

The tribe has spoken.