Our trek in Nepal seems rather frivolous in light of the recent earthquake and the suffering that is going on there. However, we have wonderful memories from our time there, and our thoughts are with the people we met.

We often had the Jackson 5 song stuck in our heads during the days of hiking towards “A.B.C.” — the popular name for Annapurna Base Camp.

After the stunning sunrise vista at Poon Hill that Kaia described in the previous entry, we hiked through more rhododendron forests, past Prakash’s favourite viewpoint on the trek, and towards a mountain pass at Tadapani.  However, this involved a huge downhill followed by a huge uphill… affectionately known as “Nepal flat”.

At our lunch spot that day, we saw a hiker with his foot elevated and swollen.  One bad turn of the ankle and the trek becomes more complicated (and shorter, and probably quite a bit more expensive!)  He was a physiotherapist from Belgium and knew that his best option was to be airlifted out.  However, he had to get to a place where a helicopter could safely land which was several kilometers of “Nepal flat” away.  He limped along with a trekking pole in each hand and eventually made it to Tadapani.  We also stopped in Tadapani (early — around 1pm) because of our pre-dawn start that day (hiking by 5am).  Prakash had predicted that Tadapani would be busy and there might not be many rooms available at the tea houses.  Sure enough, we got the last 2 rooms at a fairly mediocre place.  The dining room/common space was so small that we had to take turns with the other guests to sit at the table!  But we managed to have hot showers which are a great boost to the morale.  We also spoke to a young Norwegian man who was on his way down from ABC and he was definite in his advice: “You MUST go there.”
The weather was pretty socked in at Tadapani and we didn’t get a view until around sunset when some of the peaks popped out.  Next morning, we saw the helicopter come to pick up the injured Belgian and his girlfriend.

We hiked (mostly down) to a place called Chiule where a group of Australians was camping.  They were on an ambitious trek that should have taken them to some high passes but the weather had foiled most of their plans.

We had another day of steep down/steep up, but the trail was quite open in many places so we enjoyed great views across the valley.

We passed a school that was getting a new roof.  Slate tiles.  Carried up by donkeys. 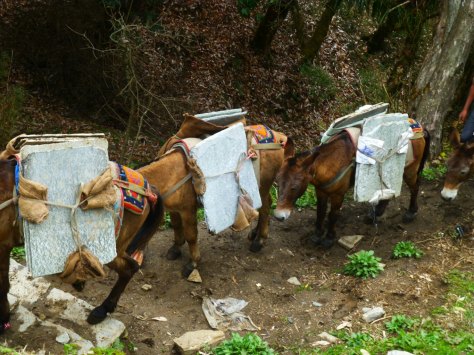 That afternoon, we arrived in the bustling metropolis of Chhomrong.  It actually was quite a big village that boasted some souvenir shops and not one, but two “German bakeries”!  We got set up at the Elysium Guest House (great view and excellent kitchen, we found out at dinnertime).  The guesthouses make most of their money on meals and the pricing for the rooms is based on the assumption that you buy dinner from the same establishment.  We had been thinking of eating across the road at a place that got great reviews for its burritos and chocolate cake, but when we found out that the cost of our rooms would quadruple, we changed our minds.  And the food was delicious at Elysium!


Next day, we started with another major downhill (the knees and thighs were really starting to feel it, and I was using a trekking pole by this point).

Continuing up the valley of the Modi Khola, we had lunch at a little well-named place called Bamboo.  It rained throughout the entire lunch stop, but cleared up as we got back on the trail.


We spent the night at the village of Himalaya with 35 grade 9 students from United World College in Singapore.  They were all in a pre-IB program and this was part of their outdoor education.  We were impressed!  And also kind of happy that we weren’t the supervising teachers.  But, they had several professional expedition leaders as well as an army of porters, so the students only had to carry small day packs.  The group leaders performed a simple medical exam every evening on each student.  They had spent the day acclimatizing at Himalaya (~3200m) to make sure that all were in good shape to head up to ABC.  It also meant that the students were going a bit stir-crazy and had lots of energy for singing, laughing and guitar playing into the evening (I think Kaia mentioned the paper-thin walls at the guest houses).  We made sure we left early the next morning to get well ahead of them on the trail!

The following day was one of the most exciting and scenic of the trek.  We did a substantial amount of climbing (about 1km vertical) and the mountains were really coming into view.  Until the clouds rolled in and it started to snow, that is.

Hiking through a place called “Deurali” en route to “MBC” (Machhapuchhre Base Camp), I realized that those names fit in quite nicely to our new version of the Jackson 5 song:
ABC, not as easy as 1-2-3,
it’s further than Deurali,
and MBC; ABC is a sight to see!

We hiked the last section in snowfall — it was beautiful! The steady uphill trek kept us warm, and we knew we’d have a room (and hopefully a view) once we got to the base camp.

In our high altitude haze, we saw some movement in the snow…

After dinner, we actually ended up going to one of the other guesthouses to take advantage of a little more heat generated by more bodies. We played some cards, but went to bed early in anticipation of getting up for sunrise. It was a chilly night, but the extra blankets kept us just warm enough!
Yvonne