The southeastern part of Germany is known as Bavaria, called Bayern in German.  It’s more traditional than other parts of Germany, and most people that live in this part consider themselves Bavarian, not German.  The city of Munich, or München in German, is the biggest city in Bavaria, and apparently worth seeing, so we decided to go there.

The weather forecast had been saying all week that a certain day would be very rainy.  The morning of that day that we spent in Augsburg was fine, but we had already decided to take a train to Munich instead of riding.  It’s pretty easy to take your bike on trains in Germany.  And, sure enough, on the train, it rained for a while.

We had heard from a few people that they really liked Munich.  My dad went on the Warm Showers network (people who open their house to cycle tourists) and found some people who let us stay with them in Munich.  He also looked at TripAdvisor reviews for the best things to do there, and one of the activities that got great reviews was a bicycle tour of the city.  So, we contacted a company that runs these tours, and found out where to meet for the tour.  The train from Augsburg arrived at Munich Hauptbahnhof (central train station), and then we rode to Marienplatz, the central square, where we met the rest of the tour group.

The tour guide was a guy named Tony, from Washington DC.  He has loved Munich ever since he moved there 9 years ago, and he’s really fun and enthusiastic about the bike tour.  He really brought history to life for me!

There were 11 people on the tour, including us.  2 were from Scotland, and the rest were all Canadians!  First, Tony told us some general history on Munich, and specifically, on Marienplatz.

Things have been happening that square for a long time.  Munich used to be the “capital” of the old kingdom of Bavaria, so the king held many celebrations in the square.  For a royal wedding that happened there, they even held a jousting tournament!  You know, when knights on horses run at each other with big lances and try to knock the other guy off his horse.  Sounds pretty entertaining!

Then, we walked to the bike tour shop to get bikes.  We already had ours, but we left all our paniers and trailer there.  Once everyone had a bike, we started the ride around town.  We visited another square, with a statue of King Maximilian in the middle.  If I remember correctly, his son Ludwig’s wedding got re-celebrated every year, and now it’s known as Oktoberfest.  Don’t blame me if I’m wrong though, because I find European monarchs’ names extremely confusing (King Ludwig I, II, III, and so on).

We went to an old government building, with a big courtyard in the middle of it.  It looks like all the walls are intricately decorated, but at a second glance, you’ll see that some of it’s just painted on!  The reason why is that before Germany started World War II, they knew that their towns would be bombed, so they hid some of their precious artwork (statues, paintings, etc) in lakes and salt mines so that they could be put back after the war.  They did start to restore these things after the war, but didn’t have enough money to complete it.  You can see that some of the pillars and windows in the government building are real, and others are just painted on.

Outside the building, there are a few big statues, but before going out to see them, Tony had us “act” out the statues. 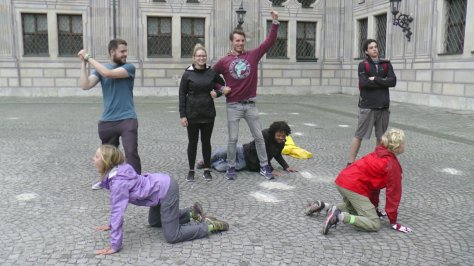 The statues have interesting meanings.  The lion on the left (Kaia) has it’s mouth open, facing the government building, and the one on the right (me) has it’s mouth closed, facing a big church.  It means that you’re allowed to criticize the government, but not the church!  The statue in the middle represents when the kingdom of Bavaria became part of Germany.  It means: “Germany can have our flag, they can have our lion (the symbol of Bavaria), but they can’t have the Lady of Bavaria”, or in other words “we’re still Bavarian”.  I don’t know what the two soldiers on the sides represent though.  I still think the one we did was better!

We had a look inside the theaterin kirche church (the one that you’re not allowed to criticize!)

After touring of the old part of town, we went through a big park called the English Garden, which is bigger than New York Central Park!

The bike tour stops at a Biergarten (beer house), but the one it usually goes to was closed, so we went a smaller Biergarten in the park (don’t worry, Kaia and I didn’t have beer!)  We chatted with the other people on the tour as we ate wieners and pretzels.  My parents were surprised that some others on the tour drank two full litres of beer! My dad had a half litre and Tony said that Bavarians would ask 1/2 L drinkers if they were still in Kindergarten. My dad ordered another half litre. Tony said that people who don’t want to drink all that alcohol get half beer and half lemonade, so it still looks like 1L of beer.

The last stop on the tour was… the surfers!  There’s a wave on the Isar river that people can actually surf. 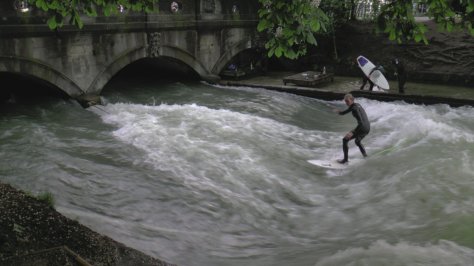 It’s an unusual wave to surf, because instead of riding with the flow of the water like you do in the ocean, you ride against the flow.  It’s certainly much harder than where I’ve surfed on Zancudo beach in Costa Rica and Kuta beach in Indonesia, but the surfers there made it look so easy.

The bike tour was really fun.  I think it’s a great way to see a city like Munich.  At the end of the tour, we rode back to the bike shop to pick up our stuff, then rode (through pouring rain and hail) to Götz and Liza’s apartment, the people we met through Warm Showers.  Götz has cycled through New Zealand staying with Warm Showers people, and now opens his apartment to cycle tourists like us.  Their apartment is pretty small, but there was enough floor space for us to sleep on our air mattresses.

We were out all of the next day, but it wasn’t at all as joyful as the bike tour: we visited the Dachau concentration camp which is about 30km out of Munich.

It’s a really sad place.  Dachau was a concentration camp before and during World War II, but now, it’s set up like a museum.  The main building has many informational plaques, and a small theatre showing a video about the camp.  I’ll share a bit of what I learned with you.  I used to think that concentration camps were only used to imprison Jews, but I learned that there were also Hitler’s political opponents, communists, homosexuals, prisoners of war, and pretty much anyone else the Nazis didn’t like.  This particular camp was only for men.  It was originally built to hold 6 000 prisoners, but at one point there were more than 60 000 of them.  Prisoners were forced to work extremely hard all day, but were hardly given any food.  How is someone supposed to work hard without any food in their belly?  And the guards treated them so poorly.  Twice a day, they had attend “roll call”, where they had to stand straight and motionless for hours as the guards did “attendance”, but mostly just for torture.  They were also brutally punished for the slightest thing, like a missing button on a shirt for example.  About 49 000 prisoners died there, but not from the “gassing” used in other concentration camps to murder large amounts of people at once.  They were either worked to death, starved to death, beaten to death, and many Soviet prisoners of war were brought there, where they were shot.  Typhoid outbreaks killed many too. It was finally liberated by the American army in 1945.

There was a gas chamber, but it was never actually used for mass murder, like at other concentration camps.  A particularly notorious camp was Auschwitz, in Poland, where thousands upon thousands of people were brought in on trains, then murdered with poisonous gas.

These next photos were taken from the Internet.  They’re from between 1933 and 1945, when the camp was still in use.

The visit to the Dachau concentration camp left me feeling very sorry for all the prisoners who died or spent time there, but also feeling appalled that Hitler could actually do that.  How could someone think that putting people in concentration camps would do any good?  What did those people ever do wrong?  It seems like pure evil to me.

We took the train back to Götz and Liza’s apartment, and went out for Mother’s Day dinner at a lovely restaurant on a walking street.  It wasn’t the usual cheery way to spend mother’s day but it was a nice meal in the end.

We left Munich at mid afternoon the next day, but we went downtown to see a few more things in the morning.

We climbed to the top of a church tower near Marienplatz. 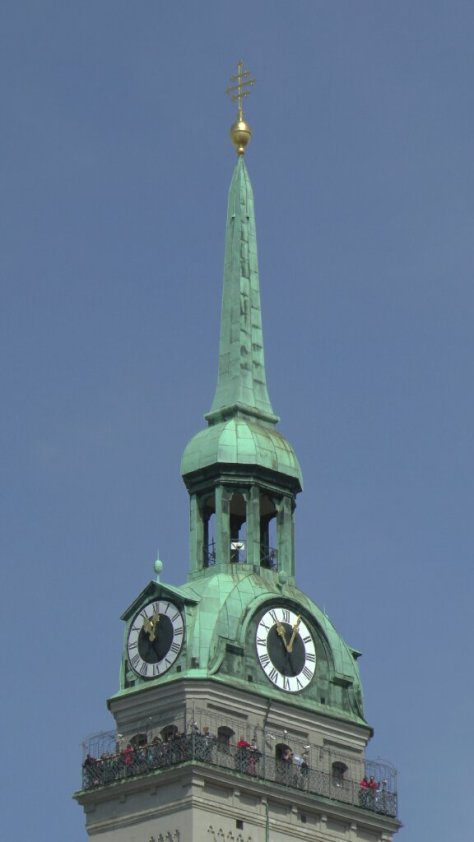 We also went to the Munich food market.

And back in Marienplatz, we watched the 12:00 PM glockenspiel, a carousel type of thing on the clock tower that shows a mini jousting match. 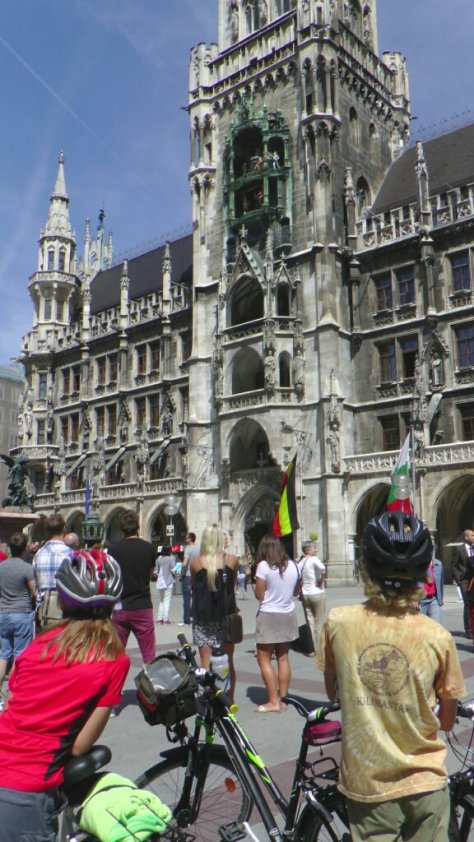 It always has the same outcome: the Bavarian horse always wins!

I think we experienced a lot in and around Munich.  The beautiful, the evil, the friendly, and the yummy.  It’s a really cool city, and it made great first impressions of Bavaria.  Next stop: Neuschwanstein!