“Amsterdam is one of those iconic cities” said my dad as we rode into the city one afternoon after a very windy 50 km ride from Utrecht. Amsterdam first caught my interest when I read the book and watched the movie of The Fault in our Stars by John Green, which partly takes place there. And I can say that our visit to Amsterdam was at least as magical and beautiful as John Green portrayed it.

We are very lucky to have a friend in Amsterdam, who lives about 10 minutes by bike from the city centre. We met Saskia when we lived in Namibia. She was also there through VSO (Volunteer Services Oversees), and was living in the nearest city, Rundu. We stayed with Jelda, (also a VSO in Rundu) in Utrecht, and then with Saskia in Amsterdam. Lucky us!
Saskia was out when we arrived, but she texted us and suggested a very close Indonesian takeout spot for dinner. We had fun practising our (very limited) Indonesian that we had learned there, with the restaurant owner from Surabaya, Java. We brought the food back to Saskia’s place to eat it. It was delicious! Soon after, Saskia walked in. It was great to see her again!
She lives on the bottom floor of a 4 or 5 storey building close to downtown. Since she is on the bottom floor, she has a big backyard, where we could easily fit our tent (a bit easier than fitting our tent in Jelda’s backyard!) We caught up with Saskia about what we had done since we had last seen each other.

In the morning, Saskia said goodbye to us, because she was going to Belgium for the weekend, and invited us to stay in her apartment longer if we wanted. But before she left, she recommended to us the Rijksmuseum, an art gallery downtown with hundreds of paintings from very famous Dutch painters, like Rembrandt and Van Gogh. To get there, we rode though Vondelpark, Amsterdam’s central park. It was lovely. So many people out for exercise, or just chatting at a picnic bench. Also, there were the people like us, riding our bikes from A to B, and enjoying Vondelpark, at the same time.

When we came out of Vondelpark at the other end, we were in central Amsterdam. We weren’t exactly the “only bikes there”. Amsterdam is known for its bicycles. And no wonder! When we ride our bikes back home in Peterborough, we are almost always the only bikes on the bike lane, when there is a bike lane. So, we don’t have to be so alert. Amsterdam is a very different story… now we are the majority of traffic, not some strange outcast. Now we have traffic rules. Whoa. We will leave that for a separate blog entry. But, I just want to emphasise how many bikes there were. Mind blowing!

Finally, we arrived at the Rijksmuseum (say Rikes museum).

The art gallery is located across the street from a canal, as most of Amsterdam is.
I was blown away at the Realism painting style of the Dutch. I can’t really remember details or names (except Rembrandt and Van Gogh), but I can remember some stories associated with the art.

Rijks museum was very well done. The explanations beside the paintings were very interesting. But the best thing about Rijksmuseum was that there are sheets of paper for almost every piece of art, with a print of that specific painting on it. The print has circles around all the interesting parts of that painting, with explanations on the side. So you could take a sheet, study the painting and find the coolest parts of it. Then, you put the sheet back where you found it. Also, you can download the “Rijksmuseum app”, and listen to even more interpretation.
But we weren’t finished: we still hadn’t checked out the boat exhibit.

Wow… I was surprised to learn that there were so many amazing artists in such a small country. I would recommend Rijksmuseum to anybody who wants to learn interesting things about history, art, or just the Netherlands in general. Everything was really well explained, with just the right amount of detail.

Right behind Rijksmuseum, there is another one of Amsterdam’s landmarks: the I amsterdam letters.

By then it was raining, so some street musicians were performing in the tunnel under Rijksmuseum.

One thing you may know about Amsterdam is that the city has many canals. In fact, all of the Netherlands is full of canals. Amsterdam has many rings of them, with smaller canals connecting the rings.

The best ways to see Amsterdam are by bike and by boat. Since it was raining, we chose a boat tour. 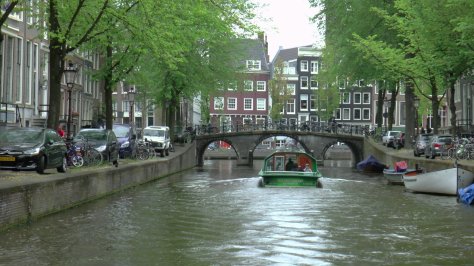 Have you read the book of The Diary of Anne Frank? Actually, I haven’t yet. But she and her Jewish family lived in Amsterdam, in the secret annex of her father’s business during the holocaust. You can visit the Anne Frank house, if you are patient enough to wait in line! But we saw posters about an Anne Frank play, and people had told us that it was very worthwhile and if you see it, you don’t feel like you have to see the Anne Frank house. So, we booked seats for the evening performance. While we were riding there, it started POURING rain! But we were late and had to keep going. At one point, my mom had a very bad fall that still hurts to this day. Finally, google maps said “you have arrived at your destination”. We were in a construction site. We thought that google had sent us to the wrong place altogether, and we had paid a bunch of money for theatre tickets. But, luckily, we looked a bit more in that neighbourhood and found it! The play was about to start, so the people hustled us to some seats near the back right on time.
Since this is a touristy kind of play, there is a VERY slick translation system. The actors are speaking Dutch, but if you want another language, you get a stand that holds an iPad and earphones. You choose between about 8 languages, and audio and/or subtitles, and there you go. Someone behind the scenes is on a screen clicking whenever a line is said, so you hear the lines real time, even if timing varies between actors of the same role. I loved how even in the English translation, you hear the lines spoken in a Dutch accent. Listening to the translation hardly even detracted a bit from the overall experience.
Anne was born in Frankfurt, Germany in 1929, but she, her parents and older sister Margot moved to Amsterdam in 1933. In 1942, for Anne’s 13th birthday, she received a diary. But unfortunately, shortly after, her family was forced to go into hiding in the secret annex of her father’s business. A woman named Miep delivered them food and supplies. Soon, 4 other Jews joined them in hiding and they were 8 in the tiny apartment. In her diary, Anne describes the challenges of living in cramped quarters. Since she was so bored, she starts flirting with the other family’s son, Peter. But she gets very tired of him, and he starts really liking her! At one point, she is forced to share her room with a very strange adult man! They would often fight over the table in the room — she wanted to write in her diary, and he wanted to study. The way she dealt with these problems was writing in her diary, because it was her only loyal friend to whom she could tell all her troubles.
Horribly, they were found by some Nazis and were brought to a concentration camp. The Nazis threw her diary on the floor. She and her sister Margot were together until the very end, and they died, probably of typhoid in early 1945. Anne was 15.
The only family member to survive was her father, Otto Frank. The family’s loyal friend Miep found Anne’s diary in the secret annex, and it was first published in 1947.
I really enjoyed that play. It showed the story of the Holocaust from a 14 year old girl’s perspective, which made it easier to understand and relate to for me. The translation system was so slick as well, which made this play really excellent. I highly recommend it. I’m now very interested in reading the book.
By the way, the production has only been on for one year, and it’s just getting started. The theatre it takes place in was built for this play. A few days after we went to it, my grandma emailed us and said that she went to see the Anne Frank play in Stratford, Ontario!
The ride home was a bit sketchy in the dark, but luckily we all made it home safely.

The next day, we were going to ride into the city and explore a bit more before riding out of town. But we were all so exhausted that we took a rest day, a day when we are not a) riding somewhere or b) intensely exploring a city. We rode into town again just to ride around and enjoy Amsterdam’s fantastic bike paths.

My dad gets an email news feed every day of ‘”clean tech” news, and the day before there was an article about a solar panel sidewalk in a village outside of Amsterdam.  So he rode 30km out of town to see it.  He said he didn’t mind riding on a day off because he did not have the bike trailer hooked up.

He said the ride there was great but the solar road was “underwhelming” to see. It is only six months old and was apparently quite controversial locally because of the cost and people didn’t think that the sidewalk would generate much electricity.  But it actually has generated much more than expected (70m long and 3000kWhr in 6 winter months) so it seems to be a good news story.  It was built by a company that is experimenting with generating electricity from road surfaces.  Maybe we’ll see more of these in the future.

The rest of us just rode around downtown. We saw the Anne Frank house, and it had a really long lineup! We spent that night at Saskia’s place again, and rode out of town the next morning.
Amsterdam is such a beautiful place. It is on my bucket list to live in downtown Amsterdam for a year or more. A bicycle can get you anywhere in town, and a train can get you anywhere out of town. Arts and music are everywhere. The downtown makes you feel like you’re in the past. All of this together make Amsterdam a beautiful, magical and unique city! I’ll be back, Amsterdam!
Kaia